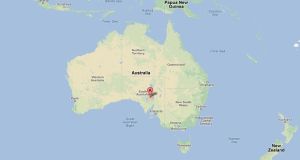 Wommera in South Australia has been closed to the public since 1947, when it was used for Cold War rocket and nuclear tests by Britain, Australia and the US. Image: Google Maps

Australia will ease access restrictions on the world’s largest weapons test range in the remote outback - an area larger than England - to unlock an estimated Aus$35 billion (€26 billion) in untapped mineral resources, with legislation for the change unveiled today.

The Woomera Prohibited Area covers 127,000 square km of mostly barren desert and has been closed to the public since 1947, when it was used for Cold War rocket and nuclear tests by Britain, Australia and the United States.

The sprawling site, which is almost free from electronic signal interference, was also chosen this year as test site for the joint British-French unmanned supersonic stealth drone Taranis, under development by BAE Systems Plc.

Defence minister Stephen Smith told MPs that new legislation would allow miners and some members of the public with reason to be there to share access to the land with the military, to better balance national security and economic concerns.

“The South Australian government has assessed that over the next decade about $35 billion worth of iron ore, gold and other minerals resources are potentially exploitable from within the Woomera Prohibited Area,” Mr Smith told parliament.

The change, under consideration for three years, is an attempt to ease investment concerns around land near Woomera since the government blocked Chinese company Minmetals from buying an Oz Minerals copper and gold Mine at nearby Prominent Hill in 2009, citing national security.

Parts of Woomera, which hosted British nuclear weapons tests between 1955 and 1963, also lie adjacent to the Olympic Dam site, which BHP Billiton decided not to expand last year as Australia’s mining boom stalled.

A small number of mines already exist in the area, including Prominent Hill and Kingsgate Consolidated Ltd’s Challenger gold mine.

Under the new access arrangements, the military would remain in charge of the area, but a permit system would give civilians the right to enter Woomera. As well as miners, indigenous Aboriginal residents can also enter the zone, and environmental or other researchers.

The legislation sets up a series of zones, some of which would be zoned red for “continuous defence use” and others which would exclude mining and exploration for between 14 and 70 days a year, in a timeshare arrangement with the military.

“It allows users to make commercial decisions with some assurance as to when they will be required to leave the Area because of defence activity,” Mr Smith said.

It was unclear if the changes would ease national security concern about Chinese mine ownership, as foreign investment applications would still be assessed by Australia’s Foreign Investment Review Board.

China-based hackers were this week accused of stealing the blueprints to Australia’s new domestic spy agency in Canberra.

The government of South Australia state has estimated the vast test site holds untapped gold, copper and uranium resources worth up to Aus$35 billion, while other estimates for total mineral wealth run as high as Aus$1 trillion.

Mr Smith said the legislation would be passed as a priority before parliament was dissolved for September elections.