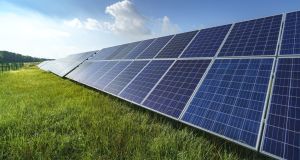 Energy business Amarenco Solar is borrowing €12 million in bonds to finance its growth in the Republic and international markets.

Cork-based Amarenco said it would use the cash to finance its development as an independent power producer in the Republic, Europe, the Middle East and Far East.

The company plans to begin building eight solar power plants, with a combined capacity to generate 40 megawatts of electricity in Co Cork, next March.

Amarenco will receive a guaranteed price for the electricity generated by the plants under the Government’s recently launched Renewable Energy Support Scheme.

John Mullins, executive chairman of Amarenco Solar, said “we expect to announce one further large fundraise prior to year-end”.

Amarenco’s senior counsel, Rossa Fanning SC, said his client sought the protective order because the defendant’s Irish solicitors had threatened to seek the winding-up after close of business on Wednesday.

The case arose from SDCL issuing proceedings in the English courts against Amarenco over an alleged debt of almost €580,000, for which his client says there is no basis.

Mr Mullins said in a sworn statement that Amarenco was a successful solar energy developer and operator with 145 workers.

Mr Mullins said SDCL took no part in this or any other fund-raising activities from around November 2018.

Earlier this year, SDCL issued a pre-action letter, which in England is a precursor to court proceedings if no compromise is reached, demanding €579,903.

Amarenco disputed this, but SDCL’s Irish lawyers issued a statutory demand for payment.

In its demand, SDCL claimed, among other things, Amarenco had raised €55 million in capital as a result of the first agreement. Amarenco says it only benefitted from the initial €19.2 million.

Mr Mullins said Amarenco was solvent, with nearly €7 million in cash. It was not the case it could not pay the alleged debt, but simply that Amarenco did not believe it was due and owing.

While Mr Mullins believed any winding-up petition would fail, the fact of its presentation and subsequent advertisement “may cause significant and irreparable harm” to the group.