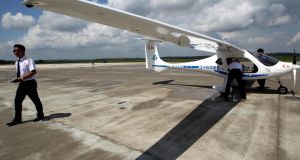 China’s first domestically-developed electrically-powered light aircraft (Rui Xiang RX1E). The two-seater airplane is made of a carbon-fibre composite material and is powered by an electric motor running on lithium batteries, with each recharge using only 10KW at a cost of about 80 cent. Photograph: Chinafotopress/Getty Images

Manned, electric planes are flying into the mainstream. Manufacturers in Europe, the US and China are now awaiting certification in order to commercialise their models. And this isn’t just enthusiasts. Airbus can see where the market is going, at least for smaller planes, and has thrown its hat into the ring.

In China construction has begun on a plant manufacturing two-seat Rui Xiang RX1E electric airplanes. Developed at Shenyang Aerospace University, the aircraft will be able to fly for 90 minutes on a full charge.

Airbus successfully flew its battery-powered E-Fan across the English Channel last summer. The company plans to sell the planes commercially by 2017, and eventually create larger, commuter versions within the next two decades.

Of course, the Americans are in on the game. “We have been developing the technology since 2008 and now have a small, electric airplane in production,” explains George Bye, chairman and CEO of Bye Aerospace in Colorado. “The Sun Flyer is a two-seat training aircraft with a three-hour flight endurance. It can climb 1,000 feet per minute, and reach speeds up to 125 knots [232 kph]. It’s equal to or greater than a comparable traditionally powered plane in every way, kind of like a Tesla with wings.”

Perhaps the most impressive display so far, however, has been by multiple world record-holding pilot Klaus Ohlmann in the E-Genius. Engineers at the University of Stuttgart recently improved their design of an all-electric airplane with remarkably low operating costs. In the summer of this year Ohlmann completed a 700km round trip in the E-Genius from Germany to Italy over the French Alps at an altitude of 4,000m. Recharging at the north-Italian airfield Calcinate del Pesce, the plane used only 83kWh of energy, costing €21 for the whole trip – a fraction of the cost of running a similar fuel-powered two-seater airplane.

“Electric airplanes have incredibly simple systems,” explains Ohlmann. “They are low maintenance, easy to handle and don’t smell. One of the other big advantages is how little they cost to run. Plus they produce zero emissions, assuming they are charged with renewable energy or hydrogen fuel cells.”

Theoretically they are also a safer option as, with a simpler internal system, less can go wrong. In addition, they are quiet so could be flown and landed in populated areas without any major noise pollution.

“There are some interesting prototypes in the sort of ‘home built’ one or two pilot short-range area – not to mention a whole range of unmanned airplanes with longer endurance that use solar on the wings – but the issue for all of them is that the technology isn’t yet scalable to larger size aircrafts,” says Prof R John Hansman, director at the MIT International Center for Air Transportation.

One might assume that simply adding more batteries to the plane is the solution to extending power and flight time.

“But then the plane would need to be bigger so that it could carry more batteries, which are pretty heavy,” says Hansman.

Right now the physics suggests engineers need to figure out how to do more with less. “There’s already a lot of energy in those small battery cell packages being used to fly small aircraft,” adds Hansmann. “If you increase the energy density even higher it’ll be like sitting on an explosive. What’s needed is significant improvements in battery capacity – by a factor of about 10 – in order to scale up, which is not achievable right now.”

“It works for cars because the load on the engine varies,” says Hansmann. “A motor vehicle tends to accelerate and stop frequently so energy can be put back into the battery whenever the car slows down or stops. When airplanes are cruising they don’t accelerate or decelerate.”

“Traditional flight is still so cheap, on account of the low excise on airline fuel, so the incentive isn’t there to change things.”

“Around 30 per cent of Europe’s total energy use goes on transport. In the EU strategy for energy, aviation is expected to remain largely fuel dependent until 2050. Scientifically people don’t expect battery technology to compete with energy fuels anytime soon. But that doesn’t mean we should stop doing the research.”

Not everyone is so pessimistic. “I’m convinced that many of our ‘old school’ planes will soon disappear and be replaced with electric airplane technology,” says Ohlmann. “With the rapid development of batteries and mass production, pushed by the car industry, it’s only a matter of time before we see a dramatic cost reduction. The capacity of batteries will likely double in the short term.”