Yuan in biggest fall since 1994 after surprise devaluation 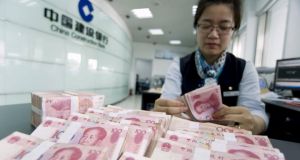 The yuan suffered its biggest fall in more than two decades on Tuesday, hitting a three-year low after the Chinese central bank surprised markets by devaluing it by almost 2 per cent, firing a broadside in what some analysts saw as a looming currency war.

The bank described the move as a “one-off depreciation” and billed it as free-market reform, but, after a run of weak Chinese data, with exports tumbling more than 8 per cent in July, many economists said it was aimed at boosting the competitiveness of the world’s second-biggest economy.

Others pointed to China’s wish to be included in the IMF’s Special Drawing Rights (SDR) basket of currencies as the main driver of the decision, arguing the size of the depreciation would not be enough to significantly help exporters.

“Our view is that this is really a move towards liberalization,” said Barclays currency strategist Hamish Pepper in London. “The idea behind it is to (show) stability ... going into a potential SDR inclusion later this year.”

The yuan midpoint was set at 6.2298 per US dollar, compared with the 6.1162 mid-point on Monday. The central bank said it would now base the yuan’s midpoint on market-makers’ quotes and the previous day’s closing price.

Spot yuan tumbled around 2 per cent to as low as 6.3360, the weakest since September 2012 and the biggest drop since the currency was officially devalued in 1994.

Simon Derrick, head of currency research at BNY Mellon in London, said the size of the yuan’s fall was a “drop in the ocean” compared with the dollar index’s 22 per cent rise since September 2012, but saw the coming days as crucial in determining whether China was entering into a devalution war.

“If we have a currency that moves much more freely, fine. If, however, we go back and it’s just repegged ... that is currency war,” Mr Derrick said.

Currencies of some countries that do much of their trade with China, such as the Australian and New Zealand dollars, were also dragged down by the move, shedding as much as 1.3 per cent at 1 per cent respectively against their US counterpart. The Japanese yen hit a two-month low.

The yuan extended losses in the offshore market, hitting its weakest inmore than three years, with traders saying that would mean more losses were in store for the onshore currency.

“Devaluation of the yuan likely won’t end here. Currencies like the Singapore dollar, South Korean won and Taiwan dollar, which stand to compete with China, are falling, and today’s move could generate headlines heralding the start of a devaluation war,” said Masafumi Yamamoto, strategist at Monex in Tokyo.

The Swiss franc hit its weakest since the Swiss National Bank scrapped its cap on the currency on January 15th, trading at 1.08675 francs per euro. Some say the SNB is making the most of low summer liquidity to amplify its interventions in currency markets.

The euro edged higher, hitting an 11-day high of $1.1042 , as investors who had held euro-funded yuan positions bought back the single currency, and after Greece and its lenders agreed on a multi-billion-euro bailout.