Common EU position on trade talks with US agreed 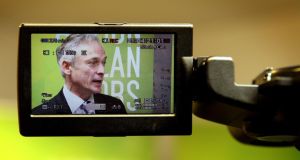 The Irish presidency of the Council of the European Union last night secured agreement on a common EU position on the EU-US trade talks, bowing to French demands to exclude the cultural sector from the negotiating mandate.

In what was widely seen as a victory for France, EU trade ministers agreed to exclude the audio-visual sector from the negotiations, though the European Commission will be permitted to make recommendations to the Council on possible additional negotiation mandates.

The agreement – which paves the way for trade talks to commence with the US – came after hours of negotiations in Luxembourg, during which France stood fast to its request for the so-called ‘exception culturelle’ to be excluded.

Speaking last night in Luxembourg, Minister for Enterprise Richard Bruton said the agreement would provide an important stimulus to economies on both sides of the Atlantic.

State supports
France had insisted that the so-called ‘exception culturelle’ – a system of state supports and subsidies designed to protect the audio-visual sector — should be excluded from the negotiations.

But the European Commission had argued that the exclusion of an entire sector could jeopardize the project, and could incentivise the US to seek their own ‘carve-outs’ when negotiations begin.

Speaking after the negotiations ended last night, EU trade commissioner Karel de Gucht denied that the agreement amounted to a ‘carve-out.’ “This is not about a carve-out,” he said. “ I will listen to what the United States have to ask us […] on the basis of that we will see how to proceed.”

France has one of the most active domestic cultural industries in Europe.

Under French law, a minimum of 40 per cent of all television programming on air must be produced in France. The country also provides around €800 million annually in supports for the indigenous film industry.

Any threat to the current supports for the sector is particularly relevant in the context of the EU-US trade talks, due to the dominance of the Hollywood film industry.

France currently imports a much lower percentage of US films than most other EU countries, but there are fears that any standardisation of tariffs for the sector could have a detrimental impact on France’s culture industry.

Next week’s G8 summit gave added urgency to yesterday’s discussions, as it had been hoped that leaders would formally announce the start of the transatlantic trade negotiations at Lough Erne.

Securing EU agreement on the US-EU trade deal has been a key priority of the Irish presidency of the EU Council since February, when a high-level EU-US working group recommended that discussions on liberalising trade between the two blocs should commence, following more than a year of preliminary discussions.

Alliance
The nascent transatlantic trade talks — known as the Transatlantic Trade Investment Partnership (TIPP) — have the potential to create the world’s largest ever free-trade alliance, but previous attempts to liberalise trade between the US and the European Union have floundered.

Initiatives such as the New Transatlantic Agenda in 1995 and the Transatlantic Economic Council (TEC) in 2007 failed to deliver any concrete proposals.

Agriculture is likely to be the key stumbling block, with the US keen to the EU ban on hormone-enhanced beef lifted. The Irish Farmers’ Association has already warned of the effects of a bi-lateral deal on the Irish agricultural industry