Why Lehman Brothers was allowed to fail

In a departure from its strategy on other banks, the US Federal Reserve refused to assume any of the risk faced by potential buyers. That decision had massive repercussions 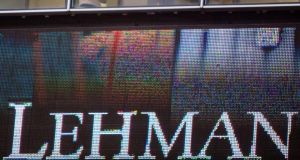 The headquarters of Lehman Brothers in New York on September 15th, 2008, the day the bank filed for bankruptcy.

W hen Lehman Brothers filed for bankruptcy on September 15th, 2008, the financial sector shook across the world. The bank was forced to seek Chapter 11 bankruptcy protection, the largest ever such filing in US history.

Six months previously, Bear Stearns had faced a similar fate but survived when the US central bank, the Federal Reserve, intervened with the US treasury department’s support. Why did the US government not intervene in the Lehman case?

In the case of Bear Stearns, the Fed engineered a sale to JPMorgan Chase by agreeing to assume $29 billion of the risk of losses from Bear Stearns. When potential purchasers of Lehman sought similar assurances from the Fed, the regulator demurred, and the bank was left with little choice but to file for bankruptcy.

According to Lehman’s bankruptcy examiner, Lehman’s business model was not unique. All of the major investment banks of the time had some high-risk model that required the confidence of counterparties.

While Lehman’s assets and liabilities of about $700 billion cancelled each other out, it had insufficient hard cash (about $25 billion) to meet its needs. Confidence in the institution was so low that clients were withdrawing funds at a rate the bank couldn’t keep up with.

Lehman funded itself through the short-term money markets and had to borrow tens of hundreds of billions of dollars in those markets each day from counterparties to be able to open for business. Confidence was critical.

Lehman’s problems began when it embarked on an acquisition spree of subprime mortgage lenders. These were lenders who provided loans to those with impaired credit ratings. Lots of Americans got loans that they couldn’t afford.

In 2006, Lehman made the deliberate decision to embark on an aggressive growth strategy, to take on significantly greater risk. In 2007, as the subprime residential mortgage business progressed from problem to crisis, Lehman was slow to recognise the developing storm and its spillover effect on commercial real estate.

Rather than pull back, Lehman made the conscious decision to double its bet, and significantly and repeatedly exceeded its own internal risk limits.

With the implosion and near collapse of Bear Stearns in March 2008, it became clear that Lehman’s growth strategy had been flawed, so much so that its survival was now under threat.

The markets were shaken by the Bear Stearns crisis. Lehman, an independent investment bank, was widely considered to be the next bank that might fail. To buy more time, Lehman painted a misleading picture of its financial condition.

After Bear Stearns’s near-collapse, the US government sent in teams of monitors from the Securities and Exchange Commission and the New York Federal Reserve Bank. As late as September 2008, Lehman told the markets that it had liquidity of $41 billion. In fact, the pool of assets it could readily monetise was just $2 billion.

Over the weekend of September 12th to 14th, 2008, an intensive series of meetings was conducted, including then US treasury secretary Henry, or Hank, Paulson, senior regulators and the chief executives of 14 leading financial institutions.

Insufficient assets
Paulson began the meetings by stating the government would do all it could – but that it could not fund a solution. The US government’s analysis on Lehman was that it did not have the legal authority to make a direct capital investment, and Lehman’s assets were insufficient to support a loan large enough to avoid its collapse.

Many commentators believe the Bush administration had run out of political capital to rescue Lehman. In addition to facilitating the rescue of Bear Stearns, on September 7th Paulson had nationalised Fannie Mae and Freddie Mac, the world’s two biggest mortgage lenders, with property exposures similar to Lehman’s.

On September 14th, it appeared that a last-minute deal had been reached with Barclays Bank in the UK to save Lehman from collapse. But the Financial Services Authority in the UK had concerns about Lehman’s liquidity and funding, while the British government wasn’t willing to commit taxpayers’ money to the rescue of a US bank. The deal fell apart.

Lehman no longer had sufficient liquidity to fund its daily operations and filed for bankruptcy on the following day. As a result of the collapse, the Dow Jones index plunged 504 points on September 15th. Bank of America was enticed to come to the rescue of Merrill Lynch.

On September 16th, AIG was on the verge of collapse; the US government was forced to intervene with a financial bailout package that ultimately cost about $182 billion. On October 3rd, 2008, the US Congress passed a $700 billion Troubled Asset Relief Program rescue package for the financial sector.

Federal Reserve chairman Ben Bernanke, speaking about the overall economic crisis, has conceded “there were mistakes made all around”.

Paulson and the others who made the decision to let Lehman go believed the bank’s implosion could be contained. However, with a balance sheet of $660 billion and extensive derivatives exposures, Lehman’s collapse reverberated through global markets.

Up to that point, the markets implicitly believed that no big bank would be allowed to fail by governments. Many believe that if he had his time over, Paulson would not have allowed Lehman to collapse. We’ll never know.