White House rules out mandatory tax on US multinational profits 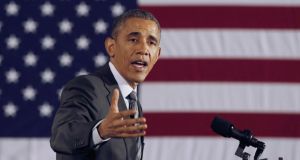 The White House has ruled out making a proposed mandatory 14 per cent tax on stockpiled profits of US multinationals in countries such as Ireland voluntary in budget negotiations with Republicans.

The Obama administration unveiled proposals to tax past profits parked overseas, along with a 19 per cent tax on future foreign earnings of companies to target cash that companies keep abroad in countries such as Ireland to avoid the US corporate tax rate of 35 per cent.

The taxes face little chance of passing the Republican-led Congress given the party’s rejection of a mandatory 8.75 per cent “toll” on income repatriated to the US, a proposal presented by a Republican lawmaker.

Mr Obama’s proposals are part of a $3.99 trillion (€3.5 trillion) budget that the president sent to Congress which includes tax benefits and programmes to help middle-income Americans funded by higher taxes on corporations and wealthy individuals.

Inviting companies to pay the one-off tax on overseas profits on a voluntary basis in a “repatriation holiday” would only encourage them to hoard companies to hoard profits offshore in future, Mr Obama’s economic advisers said.

“We are are not supportive of a voluntary repatriation,” said Jeff Zients, director of the president’s national economic council. “That is bad policy. It costs a lot of money. What the president is proposing is to reform what is a broken system.”

Mr Obama wants to tax an estimated $2.1 trillion of profits parked overseas to raise $270 billion to help fund a six-year $478 billion programme of building roads and other infrastructure.

“I know there are Republicans who disagree with my approach,” said Mr Obama. “And I’ve said this before: if they have other ideas for how we can keep America safe, grow our economy, while helping middle-class families feel some sense of economic security, I welcome their ideas.”

The budget also includes proposals that would curb “corporate inversions” where US firms buy foreign companies to shift legal address to low-tax countries such as Ireland.