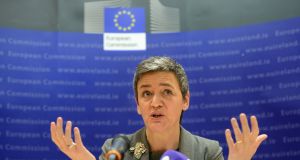 Margrethe Vestager: the European competition commissioner could not give a timeframe for when there may be a development. Photograph: Dara Mac Dónaill

Five of the country’s biggest property developers, who complained to European Commission in 2015 that Nama is breaching state-aid rules and putting them at a competitive disadvantage, will have to rely on the Government to advance their case, according to Europe’s competition chief.

“If the government want to prioritise the case, then, of course, we can put more effort into it,” Margrethe Vestager, the European competition commissioner told members of the Oireachtas Committee on Finance, Public Expenditure and Reform, and Taoiseach on Tuesday.

The comments have drawn criticism from the developers, as there is little incentive for the State to encourage the European Commission to accelerate its assessment of the complaint to see if it warrants an state-aid investigation.

The complainants – Michael O’Flynn, Paddy McKillen, David Daly, Patrick Crean and MKN Properties – allege that Nama’s plans to fund the building of 20,000 homes as part of a plan to tackle the country’s housing crisis amounts to illegal state aid.

Responding to a question on the matter at the Oireachtas committee meeting, Ms Vestager said that the developer’s complaint is still in the process of being assessed and that should could not give a timeframe for when there may be a development.

The developers argue that when the State received EU approval in 2009 to set up Nama, it was intended to repair banks’ balance sheets, and that the Government has now gone beyond what was agreed with Brussels at the time.

The complaint states that as a State agency, Nama enjoys a number of competitive advantages, including cheaper finance, and the fact that it does not to price the cost of replacing sites and housing stock, as the agency will ultimately be wound up.

“We are surprised at the commissioner’s response,” said Mr O’Flynn said. “We have written to the Commission recently highlighting our concern that it is taking so long for it to decide whether to formally open a case.”

He said that the Commission’s investigation team had initially indicated, after the complaint was filed in December 2015, that it was a priority matter.