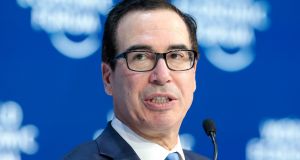 The United States wants to conclude a trade deal with the United Kingdom this year, U.S. Treasury Secretary Steven Mnuchin said on Friday.

“The UK is our number one ally and it would be at the top of the list of trade agreements,” Mnuchin said in a panel at the World Economic Forum.

“We look forward to getting that done this year.”

Mr Mnuchin also sees the US’s new 20-year bond extending “slightly” the average maturity on government debt as his department prepares to launch that security and limit the cost of financing a budget deficit set to reach $1 trillion (€900bn) this year.

Issuing ultra-long bonds, those due in more than 30 years, is “no longer on the near term – our focus for the moment is issuing the 20-year,” Mr Mnuchin said in an interview in Davos.

“If you look at the number of 20-year bonds that we’ll raise, this will slightly extend” the average maturity, he said, declining to predict by how much. “This isn’t going to be a massive extension.”

Mr Mnuchin’s comments underscore a shift in a policy in place since 2017, when the Treasury Department decided to stop attempting to lengthen the maturity of the government’s debt.

This spreads risk over a longer period and locks in borrowing costs at the current low level.

In announcing the 2017 change in its borrowing strategy, Treasury officials also appeared to de-emphasize the concept of weighted average maturity as a basis for debt policy, making clear that the focus instead was on getting the best deal for the taxpayer in the long run.

The average maturity of Treasury debt outstanding is hovering just under 70 months, compared with the average since 1980 of about 60 months. It peaked at 70.7 months in mid-2017.

The Treasury announced earlier this month that it will start issuing 20-year bonds in the first half of 2020, expanding its roster of securities as the government seeks ways to fund a ballooning deficit.

The decision comes as Mr Mnuchin continues to review options including ultra-long bonds maturing in 50 or 100 years. The current maximum is 30 years.

Many on Wall Street lobbied against those longer durations. Ultra-long debt would help limit the cost to taxpayers of plugging the budget shortfall. “The main purpose is to fund the government at the best risk-adjusted rate,” Mr Mnuchin said. – Reuters/Bloomberg