All three major American indices close up more than 2% 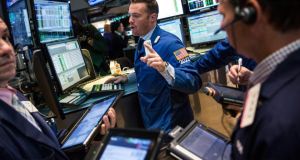 Stock markets around the world rallied on Thursday, shaking off a slump related to China growth fears, as strong US economic data boosted investor sentiment and crude oil rebounded sharply.

All three major US indices closed up more than 2 per cent, putting them higher for the week, following share rebounds in China and Europe.

“We got our pullback, and now we’re going to focus on US things like GDP and the Fed,” said John Canally, chief economic strategist at LPL Financial in Boston. “When you’re in a correction, it’s not fun, but when you’re out, you can refocus on what matters.”

Strong US growth figures were a boost for the markets as GDP growth was revised to 3.7 per cent from the 2.3 per cent rate reported last month and last week’s jobless claims fell more than expected.

The likelihood of the Federal Reserve delaying an anticipated rate raise also helped spur the recovery across world markets. New York Federal Reserve president William Dudley said arguments for a September rate increase “seems less compelling” than only weeks ago, given the threat posed to the US economy by recent market turmoil.

In Europe the FTSEuroFirst index of leading European companies closed up 3.6 per cent. Germany’s DAX, France’s CAC 40 and Britain’s FTSE 100 also climbed more than 3 per cent.

The two main Chinese indices surged 5.3 per cent and 5.9 per cent on Thursday, snapping a five-day losing streak that wiped around 20 per cent in market value and sent tremors around global markets.

All eyes are now turning to the annual meeting of the world’s top central bankers which started on Thursday in Jackson Hole, Wyoming for clues on how the turmoil may shake up policy plans.

Jackson Hole has been used to signal US policy in the past, but most investors think it unlikely this time because Fed chair Janet Yellen isn’t there. The potentially most interesting comments may come from Fed vice-chair Stanley Fischer in a speech on Saturday.

If market turbulence continues, it’s likely traders will start thinking there is an increased possibility that Mr Fischer could use his address to deliver some form of market-salving comments.

An allusion to why the Fed may be minded to hold for a bit longer given uncertainty over China’s economy would probably do the trick.The revised US growth figures show the country began the second half of the year on a much stronger footing than first estimated.

Economic expansion quickened to a 3.7 per cent annualised pace in the second quarter of the year, according to a second estimate released by the Commerce Department.

That is higher than an initial estimate of 2.3 per cent and better than the 3.2 per cent forecast by economists. – (Financial Times/Reuters/ Bloomberg)