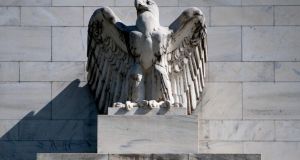 A view of the Federal Reserve building is seen in Washington, DC. Fed official Mary Daly said the length of the US economic stimulus will have to be longer than thought. Photograph: Brendan Smialowski/AFP

The US economy needs more support than originally thought as a resurgence in the coronavirus pandemic weighs on growth, said Federal Reserve Bank of San Francisco president Mary Daly on Tuesday, as Washington continued to debate a new virus relief package.

“It’s becoming quite clear that the virus will be with us for longer and more vigorously than anyone had hoped for,” said Ms Daly, who leads one of 12 regional Federal Reserve banks.

“The length of the support that the economy is going to need, before we can ever stimulate the economy, it just has to be longer.”

The economic recovery is stalling in parts of the country experiencing new peaks in virus cases while Congress debates its next round of fiscal stimulus. An extra $600 per week in benefits for the unemployed expired at the end of July, as did a federal eviction moratorium.

Legislators and the White House are debating whether to continue both measures in some form.

“As we get more information about how the virus will affect the economy, we will be thinking about how can we use forward guidance to telegraph to people, to signal to markets, households and businesses what our intentions are in terms of supporting the economy going forward,” said Ms Daly, who votes on monetary policy next year. – Bloomberg