US and EU clash over tax practice clampdown

Washington urges Brussels to ‘reconsider’ its approach to American multinationals 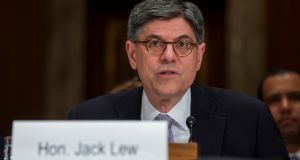 Tensions between Washington and Brussels over the EU’s clampdown on the tax practices of US multinationals are intensifying, with the US Treasury warning that it could impose retaliatory measures on European companies and individuals.

In a letter sent to members of the Senate finance committee, the US Treasury said it was reviewing a rarely used provision of the Internal Revenue Code that permits the president to double US taxes on countries and individuals in countries that have subjected US firms to discriminatory taxes.

“We are considering all modes of engagement to convey our strong view that the EC should reconsider its approach in these cases,” the letter, dated March 2nd, states.

“We have continued to make the EC aware of our concerns and strongly urged the EC to reconsider its approach.”

With EU Competition Commissioner Margrethe Vestager due to visit the US next month, officials in Brussels are playing down any expectations of a swift decision on the Apple case.

Asked about the timing of a decision on the state-aid probe into Apple’s tax arrangements with Ireland, Vestager replied on Monday: “Don’t hold your breath.”

The Irish tax authorities submitted the latest batch of information requested by the European Commission in late January and are awaiting its next move.

It is the latest move at EU level to encourage tax transparency by multinationals.

Finance ministers, including Ireland’s Michael Noonan, signed off on an update of existing EU legislation that obliges multinationals to provide certain tax-related information annually for each tax jurisdiction in which they do business.