‘Concentrated’ nature of Irish economy leaves it open to shocks 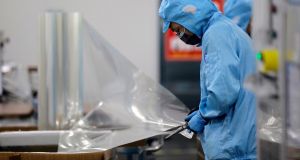 While the Republic scores well internationally in terms of competitiveness, the National Competitiveness Council warned that “a small number of firms deliver most of Ireland’s productivity performance. Photograph: EPA

The Irish economy remains competitive but threats to economic sustainability are growing, the National Competitiveness Council (NCC) has warned.

In particular, it highlighted the “concentrated” nature of the domestic economy which, it says, is too dependent on a small number of companies in a small number of sectors. This leaves the economy vulnerable to shocks, the council said in its latest competitiveness scorecard report.

It noted that the Republic’s goods and services exports are dominated by a small number of sectors accounting for the bulk of exports. For goods, pharmaceuticals and chemicals accounted for 58 per cent of Ireland’s total goods exports, up from 45 per cent in 2017, it said. The services data suggest a similar concentration, with computer services dominating services exports in 2018 (43 per cent), just below the 46 per cent recorded in 2017.

While the Republic scores well internationally in terms of competitiveness, the council warns that “a small number of firms deliver most of Ireland’s productivity performance, while there are many domestic firms where productivity is stagnating.”

It also noted that public investment here – at 1.9 per cent of gross domestic product – is still substantially below international peers.

“These below-average investment figures may have contributed to the negative perceptions of Irish infrastructural quality,” the council said, however, it recognised that through the National Development Plan, “the Government has recognised this issue and is acting”.

Overall the council said trends across a number of competitiveness indicators suggest that the Republic is in a competitive position relative to where it was 10 years ago.

Despite this, the Irish economy continues to face a number of sustainability threats, the council warned.

“As a small open economy, Ireland is particularly exposed to the actions of other countries. Factors outside of our control - Brexit, US trade and taxation policy, Chinese economic performance - will expose any weakness in the Irish economy,” it said.

The council also noted that with the strong turnaround in employment came the risk of overheating which has also been highlighted by the Irish Fiscal Advisory Council.

However, it also pointed to the possibility that this could change rapidly in the face of an international downturn.

In the report, chairman Peter Clinch said: “In recent years, the cost-base has risen and the economy has become more concentrated in certain areas, leaving Ireland exposed to the performance of a small number of firms, trading in a relatively narrow range of products and services, and operating in a small number of sectors,”

“ Moreover, with public debt levels that are the highest in the EU, Ireland is vulnerable in the face of any future crisis,” he said.