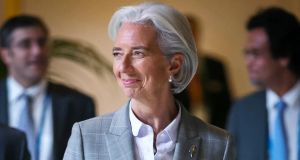 Christine Lagarde said a team would go to Kiev to carry out an independent assessment of the economic situation in Ukraine in the coming days. Photograph: Ian Waldie/Bloomberg

“We are ready to respond and, in the coming days, will send an IMF fact-finding team to Kiev to undertake a preliminary dialogue with the authorities,” Ms Lagarde said in a statement.

“This will enable the IMF to make its usual technical, independent assessment of the economic situation in Ukraine and, at the same time, begin to discuss with the authorities the policy reforms that could form the basis of a Fund-supported programme.”

Arseniy Yatsenyuk won the support of Ukrainian protesters in Kiev to lead an interim cabinet after the nation’s bloodiest unrest since World War II.

Lawmakers were set to approve Mr Yatsenyuk as prime minister today ahead of a parliamentary ballot in four months, acting president Oleksandr Turchynov told thousands gathered yesterday on Independence Square, the site of a three-month uprising that culminated in last week’s ouster of Viktor Yanukovich.

With Mr Yanukovich on the run and facing murder charges, Mr Yatsenyuk must seal a $35 billion financial lifeline to avert a default as investors pull money out of Ukraine.

While the US and the European Union have pledged aid, Russia has questioned the new administration’s legitimacy and halted a $15 billion bailout.

Ukraine’s currency, the hryvnia, is at the weakest level since its 1996 introduction.