Property price inflation put 3 per cent for May, according to official statistics 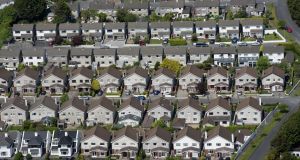 Annual house price growth in the UK slowed to its lowest levels in nearly five years in May, official figures show. Across the UK, average property values increased by 3 per cent in the year to May, down from 3.5 per cent in April, according to figures released jointly by the Office for National Statistics (ONS), the Land Registry and other bodies.

This marked the lowest annual rate since August 2013 when annual house price growth was also at 3 per cent . The average UK house price in May was £226,000.

Richard Snook, senior economist at PwC, said forecasts suggest the average UK house price could rise to around £285,000 by 2025. He continued: “In our regional forecasts we predict price falls in London in 2018 and 2019 of 1.7 per cent and 0.2 per cent respectively.” Sarah Beeny, founder of estate agent Tepilo.com, said house prices will continue to be held up by “high levels of buyer demand and a shortage of properties coming on to the market”. - PA

1 Ryanair wants Irish courts to block Skyscanner from selling its flights
2 Using analytics to deploy data science more effectively
3 Cathay Pacific to resume Dublin-Hong Kong flights in March
4 Who are Ireland’s 17 billionaires?
5 Are there annual limits on inheritances or gifts to a child?
6 Are you a Monica, Joey or Chandler when it comes to your data privacy?
7 Phil Hogan says EU ready to do ‘ambitious’ UK trade deal
8 Tipperary land holding of 800 acres seeking €11m
9 How much does it cost to sell your house?
10 Apple’s cash mountain, how it avoids tax, and the Irish link
Real news has value SUBSCRIBE