Tsipras resignation will have no impact on bailout - EU official 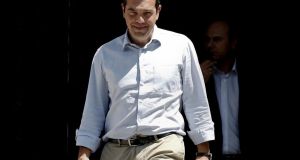 Government officials have said he will now consider his next steps, which may include fresh elections as early as September. (Photograph: Kostas Tsironis/Bloomberg)

A senior European Union official said on Friday that a snap election called by Greek Prime Minister Alexis Tsipras within hours of new EU bailout cash arriving in Athens would have no effect on the financial aid package.

When asked whether the election would change the numbers of the bailout deal, Thomas Wieser, the head of the Euro Working Group which prepares decisions for meetings of euro zone finance ministers, told Austrian broadcaster ORF: “No... this was really an expected step and for many people a desired step to get to a clearer structure in the Greek government... In October we have a meeting about a possible debt relief and (after the Sept. 20 election) we hope for further progress of the programme.”

Tsipras announced he will step down with an eye to snap elections on Thursday, a move the embattled leader will likely use to shut out dissenters and return to power with a more manageable coalition.

After his televised speech, Tsipras emerged from his Athens office onto the sidewalk at about 8:50 p.m. local time on Thursday and walked next door to hand his resignation to Greek President Prokopis Pavlopoulos, asking him to set in motion procedures for a swift return to the ballots.

Though his eight months at the helm of Europe’s most indebted country were beset by turmoil and brought the economy to the brink of ruin, Tsipras used the broadcast to list his achievements, from clinching a new aid package to securing a commitment from euro-area partners to consider debt relief. Market response to the announcement was muted.