Tsipras accuses IMF of trying to push Greece into default 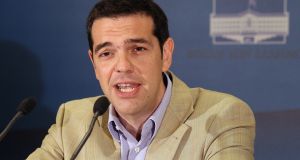 Greek prime minister Alexis Tsipras has accused the International Monetary Fund of attempting to push his country into default and demanded clarification of remarks made in a leaked teleconference transcript.

The row was sparked by comments made by the head of the IMF’s European operations and its top Greek bailout monitor on a call two weeks ago.

According to a transcript published by WikiLeaks, IMF officials expressed frustration about the EU’s slow progress in granting debt relief to Greece, and said euro zone governments have in the past left key decisions until the country was on the point of bankruptcy.

Greece has publicly interpreted the comments as a plan by the IMF to prolong negotiations on whether to take part in euro zone’s latest bailout of the country until July, when Greece is faced with its next big debt payment.

The logic would be that the impending deadline would give the IMF more leverage, allowing it to extract concessions out of a reluctant Germany on the debt relief that the IMF believes is essential for Greece’s long-term recovery.

Athens has erupted in anger over the issue, even though the comments set out in the transcripts seem to be a reflection on, and annoyance with, the EU’s inability to take proactive decisions, and do not set out any intention to take advantage of the July deadline.

The IMF has flatly denied any intention to engage in brinkmanship around credit events.

Off the record, Greek officials have argued that the transcript is evidence that the IMF is “blackmailing” Germany on the debt relief issue.