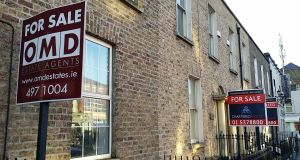 Overall, 9,339 mortgages were drawn down in the three month period compared to 7,998 for the same period a year earlier

The number of mortgages drawdowns was up nearly 17 per cent in the second quarter, while the value of these loans rose by more than a fifth, new figures show.

Overall, 9,339 mortgages were drawn down in the April to June period compared to 7,998 a year earlier, according to the Banking and Payments Federation Ireland (BPFI).

There was strong growth in both first-time buyer lending and remortgaging during the quarter.

Mortgage drawdowns for owner occupied purchases increased by 9.2 per cent year-on-year to 7,381 with first-time buyer drawdown volumes increasing by 14.3 per cent to 4,547 as mover purchase volumes rose 2.3 per cent to 2,495.

Buy-to-let volumes were up by 32.9 per cent year-on-year to 339. The value of drawdowns in the second quarter was also higher, rising 14.8 per cent to €1.66 billion with first-time buyer drawdown values jumped by 23 per cent to €983 million.

Supplementary data from BPFI shows there were 4,272 mortgages with a combined value of €962 million approved last month. This marks a 0.7 per cent rise compared to the same month a year earlier in terms of volume and by 3.4 per cent in terms of value.

First-time buyer mortgage volumes decreased by 6.4 per cent year-on-year to 2,093 while mover purchase approval volumes declined by 1 per cent to 1,249.

Buy-to-let mortgage approval volumes fell by 7.6 per cent year-on-year to 170.

Remortgage/switching mortgage approval volumes rose by 64.6 per cent to 517 while the number of top-up approvals fell by 0.8 per cent year-on-year to 243.