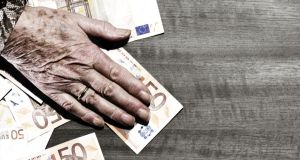 If bond markets are not a bubble, large parts of the pensions industry will, sooner or later, enter crisis.

Occasionally we get excited about bonds – recall when we wanted to burn the bond-holders. But we reckon things such as the abolition of the universal social charge (USC) are far more important.

Which is a pity, because whether the USC is 20 per cent or zero per cent is a trivial matter – for all of us – compared with what happens next to bond yields. The personal finances of everyone will be profoundly impacted by developments in the bond markets. October’s budget, and each one that follows it, are mere sideshows when compared to the evolution of bond yields.

Bonds affect everything. While we imagine central banks to be the drivers of mortgage rates the reality is that bond markets determine our housing costs to a much greater extent than anything the ECB does.

A huge portion of our tax is devoted to paying interest on government bonds: taxpayers should be grateful for bond yields that have never been as low as they currently are. But the biggest impact on personal finances comes via the link between bonds and our pensions. The brutal truth is that many pension schemes are going to be big disappointments.

The looming pensions crisis has many drivers. We are living longer, there are more pensioners and we never saved enough in the first place. Even the chief economist of the Bank of England, Andy Haldane, has admitted he doesn’t understand pensions. But the role of the bond market is key.

Bonds decide how pensions are valued and help inform us whether the ultimate payouts from these funds will be worth very much. They help determine whether pension schemes are bust. In many parts of the world, current levels of bond yields imply that without something pretty dramatic happening there are going to be a lot of impoverished pensioners.

Sometimes it’s just a matter of arithmetic: governments don’t save enough on our behalf and few of us are either willing or able to shoulder the responsibility. How many people in this country understand that there is no pot of savings that they have “paid into” via their PRSI contributions?

In other words, their future pensions are promises made by today’s government on behalf of future taxpayers – who may or may not be willing to cough up. There are an awful lot of pension promises that are not going to be kept. As time goes by, public-sector schemes are going to come under increasing strain. Again, without radical remedial action, lots of people relying on State pensions are going to be very disappointed.

Another problem arises from the simple fact that bond yields in much of the developed world, including Ireland, are as close to zero as makes no difference. Indeed, vast swathes of the global government bond market currently have negative yields. It is now virtually costless for governments around the world to borrow money.

Low or zero bond yields mean that anyone looking to invest in relatively safe assets cannot get a decent return: those negative yields imply a loss. Pension-fund promises usually require healthy positive returns; low bond yields signal that those promises might be worthless.

What happens next depends in large part on why those yields are currently so low. If, as some believe, it is simply the biggest financial bubble in history, there isn’t actually much to worry about, at least in the longer term.

Bubbles always burst and when the bond market goes south the problems caused by low yields will be solved. In particular, the investment returns offered to savers will be restored to more “normal” levels.

Unfortunately, how we get from here to there will not be painless. If the bond bubble bursts, the short-term effects will be quite nasty and, for a good while, will swamp those benign longer-term benefits.

Nobody knows whether the current state of the bond market is, in fact, a bubble. In Japan, bond bubble spotters have been wrong for decades – and are still wrong. Learning from that experience, it is perfectly possible that it will be many years before bond yields go up again.

It could be that bond markets are telling us something about global growth prospects. If so, the outlook isn’t good.

Zero bond yields might mean zero growth. And that will drive equity returns down as well. A vista for pension funds that is truly awful. If bond markets are not a bubble, large parts of the pensions industry will, sooner or later, enter crisis. A lot of pension promises are, in effect, bets that it is a bond bubble.

There is no simple or easy way out of all of this. But the solution must involve saving more and working longer. And don’t buy bonds.