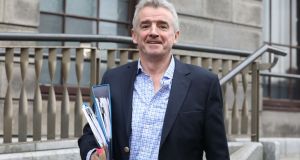 The long-time chief executive of Ryanair is estimated to be worth $1.1 billion (€886 million), with the bulk of his wealth coming from his holding in the airline. He is the third-largest investor in the listed group; his 3.91 per cent stake in Ryanair is worth more than €730 million at Tuesday’s share price – though that is over €80 million less than their value before they accepted union recognition in the face of threatened industrial action.

The airline boss also has a string of valuable racehorses and farming interests.

In total, there were 259 newcomers on the list, with 121 former billionaires – including 10 from Saudi Arabia – falling out of the list.

Ranked below the Ryanair boss among the Irish were the Limerick-born founders of payments company Stripe, John and Patrick Collison. They were both estimated to be worth $1 billion, as was Glen Dimplex founder Martin Naughton. All three were ranked joint 2,124th on a list that included 2,208 names.

There was change at the top of the overall list, with Amazon founder Jeff Bezos knocking Bill Gates off top spot. Bezos’s fortune is estimated at $112 billion compared to $90 billion for Gates. Next lies investor Warren Buffett, with $84 billion. Chief executive of luxury goods company LVMH, Bernard Arnault, and Mark Zuckerberg made up the top five.

Zara founder Amancio Ortega fell out of the top five to sixth place with a fortune of $70 billion.

While there were no women billionaires on the Irish list, the number of women on the overall list jumped by 20 per cent to 256. While the number of billionaires under 40 was relatively small at 63, it was up on 2017 when just 56 were under 40.

The overall group increased their net worth by 18 per cent to $9.1 trillion this year. The average net worth of the list’s billionaires is $4.1 billion.