With an uncertain future, you must examine both what might go right as well as wrong 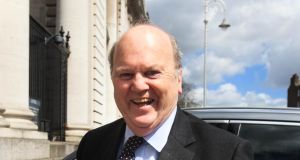 Minister for Finance Michael Noonan: it is suggested by some commentators that the recent massive fiscal adjustment was a choice made by unwise or unkind politicians, this is very far from the reality. Photograph: Gareth Chaney Collins

Memory, even of recent events, can play tricks and slogans about the past can sometimes obscure reality. Now that Ireland is recovering from the crisis of the last eight years, some versions of recent history are increasingly divergent from the reality of the past.

It is suggested by some commentators today that the massive fiscal adjustment undertaken between 2009 and 2013 was a choice made by unwise or unkind politicians. This is, of course, very far from the reality of recent history.

Already in 2008 it was clear that a massive gap had opened up between government revenue and expenditure. This was due to the totally irresponsible fiscal policy of the 2002-2007 government, which fuelled the property bubble.

The bubble generated exceptional tax revenue and an unsustainable standard of living was achieved, effectively on the back of private sector borrowing.

Unless some fairy godparent was available to fill the huge gap in the public finances when the bubble burst, there was no choice but to take dramatic fiscal action. The only issue was the timing and composition of the fiscal adjustment that had to be implemented.

Of course the crisis in the banks greatly aggravated this situation. We had to inject around 40 per cent of GDP into the banks to shore them up. In turn this put unsustainable pressure on government resources leading to the bail out.

However, the exceptionally low interest rate on government borrowing in recent years has meant that the effective burden of this banking debt is actually low. After some repayment by the banks, the interest bill on this debt is under 1 per cent of GDP.

Thus most of the very big cuts in expenditure and increases in taxes over the period 2009-14 was needed to ensure that our remaining public services were paid for – not to benefit shareholders or bondholders in banks. As an independent country, nobody outside Ireland had a duty to pay for our public services.

In the early years of the crisis some important players, such as the Irish Congress of Trades Unions, while accepting the need to balance our books to preserve services, argued that it should be done more slowly.

However, if everyone had known that Ireland would recover and that interest rates would fall to their current levels, delay could have been a more viable option, as in the UK. Such foresight was not possible. Indeed, had we delayed the adjustment, the low interest rates we enjoy now would not have materialised. While Ireland had little choice but to make the fiscal adjustment, there was a choice about how to make the adjustment. A greater focus on taxation measures, including water charges, could have allowed some additional public investment. It would also have allowed some additional protection of the most vulnerable groups in society. However, given the size of the adjustment required, it could not have been achieved without spreading the burden of adjustment pretty widely across the population.

One of the costs of the financial crisis was the excessive pessimism it engendered. At the height of the crisis in 2009-12, a constant refrain from a voluble minority was that Ireland could not pay its debts and that the future for the economy was utterly bleak.

Not surprisingly, given the magnitude of the problems facing the State, even the government gave very limited attention to the possibility of a significant economic recovery. A consequence of this pessimism was that public investment in most areas, especially housing, was all but eliminated.

When the government could not access funds at any price, this was not surprising but, as the economy returned to growth in 2012, the implications of an economic recovery should have received much more attention.

But, at the time, any suggestion by the government that there was a reasonable economic future was greeted with disbelief. Today the problem with homelessness owes much to the excessive pessimism of the 2012-13 period.

One lesson is that, when considering an uncertain future, it is important to examine both what might go right as well as what might go wrong.