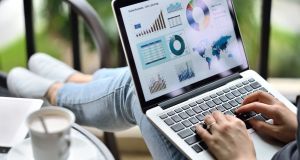 Retail Excellence Ireland has said that a leak in consumer spend to the UK threatens retail failure. Photograph: iStock

Retail Excellence Ireland has called for a cut in the VAT rate of 3 per cent to protect retailers from the worst excesses of Brexit.

In its pre-budget submission the lobby group said the 23 per cent rate should be cut in “in one fell swoop”.

Retail Excellence reiterated previous calls for a reduction in the VAT rate, this time suggesting that incremental reductions would be a “piecemeal response given previous experience has shown small reductions do not tend to have a positive impact on consumer spend”.

The group also cited Ireland’s “unique geography”, saying that online shopping and the leak of consumer spending into the UK is unsustainable and will cause retail failure unless “Brexit-proofed measures” are implemented.

Despite citing Brexit as the primary reason for seeking a reduction in VAT, the group called for the same step to be taken in advance of the UK’s vote to leave the EU last year.

The group also called for a raft of other measures in an effort to help retailers. Among those were increased funding to get businesses online, increased infrastructural investment, better Garda resources and improved access to finance.

In terms of improved access to finance, the group called for a focus on the introduction of a business-oriented bank, similar to Metro Bank in the UK, and a change in lending policy away from bricks-and-mortar security to the assessment of the strength of a business plan submitted.

Business rates were also seen as a factor that could threaten the sustainability of retailers. “We strongly urge the government to implement measures which will protect shops, and jobs which rely upon them,” Retail Excellence wrote in its submission.

According to the lobby group, Irish retailers operate some 45,000 businesses and directly employ some 282,000 employees.

“As a direct consequence of retail activity, €5.7 billion is contributed to the exchequer on an annual basis. Therefore, the significant of retail must not be underestimated,” said Lorraine Higgins, a spokeswoman for the organisation.