Rents outpace rate of inflation by factor of 20

CSO figures show rents up 9% in May but average prices up 0.4% 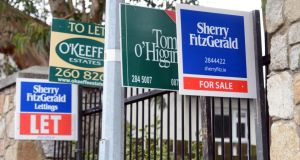 On a monthly basis, private rents were 0.4 per cent higher in May, while average general inflation was flat. Local authority rents were up 4.1 per cent annually in May and unchanged month on month. Photograph: Cyril Byrne

The cost of renting a home rose more than 20 times faster than the average level of inflation over the last year, according to new figures from the Central Statistics Office.

The data show that private rents were 9 per cent higher in May than a year earlier, while average prices across the economy as a whole rose by just 0.4 per cent.

The climbing rents came as the cost of mortgage interest fell by 9.4 per cent on the back of repeated rate cuts from the European Central Bank, with the most recent of these yet to feature in the CSO’s data. This could mean, in theory at least, that a landlord has seen his or her mortgage costs reduce by close to 10 per cent at a time where rental income before tax has climbed by almost the same measure.

On a monthly basis, private rents were 0.4 per cent higher, while average general inflation was flat. Local authority rents were up 4.1 per cent annually in May and unchanged month on month.

Philip O’Sullivan, economist at Investec, noted the private rents element of the overall Consumer Price Index has recovered by 20 per cent since reaching a low at the end of 2010, but remains 11 per cent lower than “the all-time high” reached in April, 2008.

The May CSO data partially echoes the findings of another survey earlier this week which said rents in Dublin rose by 8.4 per cent in the first three months of this year when compared to the same quarter of 2013. The CSO does not make a distinction between different parts of the country in presenting its inflation data.

Further colour on the rental market comes from an IMF study on housing released late on Wednesday that, while warning on trends in the global housing market, found that Irish house prices were 10 per cent above their long-run average in relation to rents. The IMF cited theory that house prices should travel in tandem with rents and incomes over the long term and that overly high rents should in time push people into buying. It also found that Irish house prices are 7 per cent below their long-run average in relation to incomes.

Inflation has been hovering well below 0.5 per cent in the Republic this year (it moved negative in February), contributing to concerns the euro zone is tilting towards a potentially damaging period of deflation. ECB officials have done their best to dismiss such fears, but nonetheless last week took policy action including cutting rates.