Planet Business: A big week for US politics, sewerless sanitation and Wetherspoon 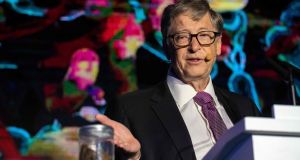 Bill Gates uses a jar of human faeces as a prop at the Reinvented Toilet Expo in Beijing: poor sanitation kills half a million children under the age of five annually. Photograph: Nicolas Asfouri/AFP

The week in numbers: Amazonian affairs

US cities that initially responded, with much enthusiasm, to Amazon’s 2017 call for pitches for the honour to host its second headquarters, HQ2.

Cities now expected to host Amazon’s non-Seattle base, with the tech giant locating 25,000 in each one. They are tipped to be the Crystal City area of Arlington, Virginia, and Long Island City, in the New York borough of Queens.

Amazon employees worldwide (excluding temporary and contract workers), according to its latest quarterly earnings report. It has doubled its workforce in the past two years.

Image of the week: Toilet trade

Forget the Web Summit, this week’s most important innovation showcase took place in Beijing, where billionaire philanthropist and Microsoft founder Bill Gates brought a jar of human faeces on stage with him at the Reinvented Toilet Expo, where he was presenting a new type of toilet that doesn’t need water or sewers. It uses chemicals to turn human waste into fertiliser instead. Ready for sale after years of development, this most significant advance in sanitation in almost 200 years wouldn’t exist were it not for globalisation and free trade, Gates pointed out. “So when I talk about components of this toilet being made in China, others in Thailand, others in the United States – you really want to be bringing together all of that IQ so that you’re getting that combination.” In other words, don’t flush all this life-saving co-operation down the pan in a trade war.

Voters in San Francisco weren’t only voting for who they wanted in Congress this week, they were also deciding on a bunch of other things, including the fate of Proposition C, a tax on big business set to raise an estimated $300 million for the city’s long-term homelessness crisis. Dubbed the “homeless tax”, the proposal became the subject of a war of words between tech billionaires and execs. Its most vocal supporter, Salesforce’s Marc Benioff, publicly took to task some of the opponents, who included Twitter boss Jack Dorsey, Zynga founder Mark Pincus and Stripe chief executive Patrick Collison. Opponents said the tax would be unfairly applied and there were better ways to tackle homelessness anyway (backing the position of mayor London Breed). Despite Stripe’s donation of $419,000 to the “No on Prop C campaign”, the tax won the support of 60 per cent of the electorate.

Getting to know: Steve Eisman

Steve Eisman, a fund manager for Neuberger Berman Group, was the inspiration for a character played by Steve Carell in the fictionalised movie version of Michael Lewis’s non-fiction book The Big Short, which should give a clue to the investment strategy for which he’s best known. Eisman, who in precrash days had a penchant for telling the most hubristic enthusiasts for subprime mortgage investments that they were going to lose every cent, was last spotted at a conference in Dubai at the weekend, where he said he was shorting two unnamed British banks – betting their share prices will fall – over expectations the UK will leave the European Union without a deal. And he had more to say, as Bloomberg reported. “I’m shorting two stocks in the UK, but I’ve got a screen of about 50, and I might short all 50 if I think Jeremy Corbyn is going to be prime minister.” First problems first, though, right?

1. William Shakespeare. Martin starts off with a little Macbeth and what it might say about post-Brexit trade. “If you can look into the seeds of time, and say which grain will grow and which will not, speak then to me.”

2. Warren Buffett. The “world’s greatest investor” is quoted – “forecasts tell you a lot about the forecaster, but nothing about the future” – in the interests of rubbishing anyone daring to say Brexit is going to have a bad impact on the UK economy.

3. Tony Abbott. The former Australian prime minister gets his own appendix for his Spectator article on trade.

4. “Man on the Clapham omnibus.” The public understands everything a lot better than Oxbridge economists, Martin explains, hence the Brexit referendum result.

5. Hospital staff. The staff of the Royal Devon and Exeter hospital get a thanks for treating the Wetherspoons founder after his burst appendix, which is a nice touch, although not typically the kind of information found in a stock market earnings update.