European Commission in fresh warning on Irish corporation tax base

Autumn outlook flags uncertainty ‘of some sources of government revenue’ 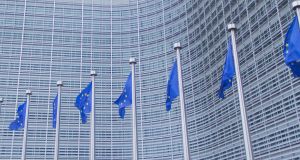 Marco Buti, director general for economic and financial affairs at the Commission, said growth in Europe peaked in 2017 and the “outlook is now less favourable”. Photograph: iStock

The European Commission has become the latest influential body to raise concerns about the sustainability of the State’s corporation tax base.

In its autumn forecasts, the commission warned that the uncertainty “of some sources of government revenue (notably corporate income taxes)” pose a major risk to the Government’s fiscal outlook.

Receipts from the business tax have more than doubled to €8 billion since 2015 amid a massive transfer of multinational assets here in the wake of a clampdown on tax avoidance.

Nearly two-thirds comes from a small number of firms paying in excess of €10 million annually and almost 40 per cent can be linked to just 10 companies.

Several agencies, including the Central Bank, the Irish Fiscal Advisory Council and the International Monetary Fund (IMF), have warned the Government not to tie spending increases to the current windfall.

In its report, the commission also flags persistent overspending in health as a key risk to the public finances.

The Government plans to use an additional €1 billion in corporation tax receipts to help pay for health spending this year, which is forecast to rise to €700 million by the year’s end.

The commission has upgraded its growth forecast for the Irish economy for 2018 by more than two percentage points to 7.8 per cent, which is higher than the Government’s 7.5 per cent forecast.

The commission, however, warns that while the Republic ’s economy will once again outperform its euro zone peers, “a large degree of unpredictability remains linked to the activities of multinationals, which could drive headline growth either up or down”.

“Ireland’s economic outlook is subject to significant uncertainties related, inter alia, to changes in the international taxation and trade environment,” it said.

The impact of Brexit and Donald Trump’s tax reforms in the US are viewed as the chief threats to headline growth.

The commission said both the employment rate and the labour force participation rate, which remain below pre-crash levels, are expected to continue “trending upward”.

The tightening labour market would further boost disposable income as it exerts upward pressure on wages.

The commission noted that the Government’s recent budget included new spending measures and reductions of personal income tax of about 0.5 per cent of gross domestic product (GDP) with these measures being partly financed by revenue-raising measures worth 0.2 per cent of GDP.

Including the pre-committed spending increases, the Government’s budget deficit is expected to remain unchanged in 2019, it said and, based on a no-policy change assumption, register a surplus of 0.2 per cent of GDP in 2020.

In his foreword to the autumn outlook, Marco Buti, director general for economic and financial affairs at the commission, said growth in Europe peaked in 2017 and the “outlook is now less favourable”.

“Barring major shocks, GDP should continue to grow at a moderate pace. The road ahead is, however, fraught with uncertainty and numerous, interconnected risks.”

While the European economy shows no signs of overheating, he said, labour supply shortages coupled with inflation across the bloc “could put an untimely end to growth”.

Both Mr Buti and commissioner Pierre Moscovici used the opportunity of the autumn forecast to press for deepening integration in the European monetary union (EMU).

“Decisive progress needs to be made on EMU deepening, in particular through the completion of the banking union, to reduce uncertainty and enhance financial stability,” Mr Buti said.

Mr Moscovici added that, in the face of an increasingly uncertain global economy with ongoing trade tensions, “policy-makers both in Brussels and in national capitals must work to ensure that the euro area is strong enough to deal with whatever the future might hold”.

Risks related to Brexit were also flagged in the forecast, although it is based on the assumption that trading relations will remain the same as they are now. However, Mr Buti said the risk of a no-deal would “entail abrupt change in trade” on both sides of the channel.

“Under any scenario, the impact is expected to be much larger on the UK than on the EU27,” he added.

1 Who are Ireland’s 17 billionaires?
2 Ireland has fifth-largest number of billionaires per capita in the world, says Oxfam
3 Barclays to cut 100 senior roles as lender seeks to rein in costs
4 Pretax profits decline sharply at Tuam-based car tech firm
5 Insolvency arrangement approved for man with €60 million in debts
6 Markets flat as investors await signing of US-China trade deal
7 Report claims liquid natural gas plant not needed in Republic – Wallace
8 How to . . . enable the Windows 10 dark theme – and why
9 UK plans to split from EU regulations provoke industry backlash
10 Link found between self-control and smartphone use
Real news has value SUBSCRIBE