Corporation tax ‘article of faith’ may be about to unravel

The 12.5% rate is economic faith at home but controversial to the rest of the world 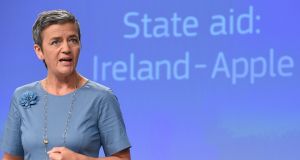 What’s the most uncontested space in Irish politics? Our 12.5 per cent corporation tax. The policy – announced by former Labour finance minister Ruairí Quinn in 1997 and enshrined in law the following year by his successor Charlie McCreevy – is the capstone of an economic volte-face initiated in the 1960s.

One that replaced decades of protectionism and a near total dependency on the British market for exports, with an internationalist agenda that opened up the economy to global markets and foreign investment.

It’s perhaps the single biggest reason why 24 of the top 25 pharmaceutical companies in the world have operations here. Or why we have the biggest per capita tech hub in the world – responsible for 30 per cent of the EU’s digital exports – with every name from Apple to Google to Facebook using Ireland as a bridgehead into the world’s most lucrative consumer market.

A study carried out by Wolfgang Digital on behalf of Smart MBS estimated that $54 billion (€48 billion) was invested here in 2017 alone by US technology businesses – equivalent to the entire GDP (gross domestic product) of Croatia.

These metrics are off the charts; nobody else in the world has anything like them. They’ve transformd us economically from one of the poorest European countries into one of the richest.

On page 26 of their draft programme for government, Fine Gael, Fianna Fáil and the Greens say: “We are committed to the 12.5 per cent corporation tax rate and recognise that taxation is a national competence.” It was probably the first line put down on paper and the least contentious aspect of the document.

Our corporate tax code is now an article of economic faith, adhered to by nearly all mainstream parties. Deviation is heresy, worthy of a political beheading. Even Sinn Féin, which once advocated increasing the rate to 17 per cent, has given up the ghost and now quietly acquiesces while railing against nearly all other aspects of the tax system.

And yet, in the eyes of the world, corporate tax is perhaps our most controversial policy, the one that attracts the most criticism, the one that places the most strain on relations with EU and US allies. We’re routinely branded as a tax haven along the lines of the Cayman Islands by NGOs and a patsy for big businesss.

The European Commission’s €13 billion Apple tax ruling, effectively the largest corporate tax fine in history, lays at the feet of the Irish Government the charge of “artificially” lowering the tax paid by Apple here since 1991.

US economist Joseph Stiglitz this month accused us of “robbing” from our European neighbours by allowing Apple and others pay such a low effective tax rate.

But it is not Ireland’s low rate of corporation tax that galls so much, rather the effective rate companies here end up paying. And that was perhaps just as much a fault of the US code, albeit before it was reformed.

Undettered, the Government here motors on, plying the line of least resistance, opposing change within the EU while ostensibly playing ball with global efforts to reform the system under the auspices of the Organisation for Economic Co-operation and Development (OECD). Now that process is threatening to unravel. US president Donald Trump has seemingly dashed plans for a new global tax framework for technology companies by pulling out of talks with European countries, and warning them of retaliatory measures if they press ahead with their own taxes.

The move has been met with dismay in Europe, where several countries hope to use a new tax on digital sales to replenish their Covid-19 depleted public finances.

The US exit may be a temporary ploy by Trump to push the thorny issue of tax out past the US presidential election in November or something entirely more divisive. We don’t know yet.

France is threatening to push ahead with its own digital tax, potentially putting the EU and the US on a collision course with Ireland once again the meat in the global tax sandwich.

As host to most of these digital giants, Ireland’s default position is to side with the US. That’s why we oppose EU moves to push ahead with a digital tax, advocate a global deal via the OECD, and side with Apple in its appeal against the Commission’s ruling. That position may prove extremely tricky in the coming months when we need the EU’s help on Brexit.

Europe’s push for a digital tax is a reaction to the fact that successive attempts to reform the global system have delivered very little additional tax receipts for countries like Germany, France and Britain where these digital companies have most of their European sales.

The move to better align reported profits and economic activity is proving extremely problematic for digital services, where value derives less from production than from intellectual property.

Think of how difficult it would be for a traditional bricks and mortar business to manufacture a product that goes into every home in France and how, relatively speaking, easy it is for Facebook.

The digital age has created giant companies – Amazon, Google, Apple – which dominate markets and run rings around traditional global tax rules and Ireland stands at the centre of it.

Reforms under the OECD’s Beps (Base Erosion and Profit Shifting) project or reform of the US tax code itself have only cemented Ireland’s position as chief beneficiary with a further onshoring of assets here and an even bigger influx of corporation tax receipts. This despite repeated warnings that we could lose out if the system changed.

Will the US’s latest move break our winning streak?