Public pay: strive for parity not a premium

Public pay policy should strive for broad parity with the private sector for equivalent skills, experience and effort 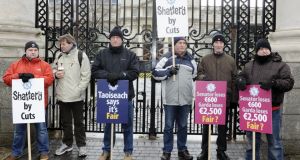 Public sector pay protests: With the fiscal adjustment virtually completed and with a return to limited private sector wage increases, it is appropriate to consider increases in remuneration for public sector workers. Photograph: Dave Meehan

Almost everyone in Ireland has experienced a major cut in living standards as a result of the necessary fiscal adjustment over the last seven years.

While tough budgetary programmes were also implemented in many other EU countries, the magnitude and scale of the adjustment in public sector pay rates in Ireland was exceptional, with only Latvia and Estonia having more drastic reductions.

Combined with the increase in the burden of taxation, which affected everyone, the pay cuts for Irish public servants meant a major step down in their standard of living. For those who had bought houses or entered into long- term financial commitments on the basis of their boom-time incomes, the outcome has been very painful.

Public sector pay is a major element of Government expenditure, and a key factor in the decision to cut pay rates in the crisis was the evidence that public servants, on average, were much better paid than private sector workers, even taking account of their higher qualifications and experience.

Crucial to the increase in the public sector pay premium in the boom years was the “benchmarking” awards made from 2003 to 2007.

Taking account of differences in factors such as qualifications and experience that can be expected to affect pay rates, research showed that between 2003 and 2006 the public sector pay premium rose from 10 per cent to almost 22 per cent.*

That gap would have been even wider if account were taken of the more generous public service pension arrangements.

In 2009 pay rates in the public service were cut and a pension levy was introduced, which also reduced take-home pay. Further pay cuts and adjustments in working conditions were enshrined in the Croke Park and Haddington Road agreements. Together, these changes served to reverse much of the effects of the “benchmarking” of the last decade.

While data are not yet available to allow up to date public-private pay comparisons, a recent study, using data from after the implementation of the major cuts in 2010, provides useful information on how things have changed**.

However, the bottom 10 per cent of public sector earners were still paid over 20 per cent more than comparable workers in the private sector.

The pay differential in favour of public sector workers is significantly higher for women than for men. This may be partly explained by the fact that there is better de facto protection from discrimination in the public sector. It may be that women in some areas of the private sector are not receiving compensation commensurate with their skills and experience.

Since the data used in the latest study were collected in 2010, there have been further adjustments as a result of the Haddington Road agreement. This has included a lengthening of working hours, which may have had more practical impact on those in lower-pay grades who are entitled to overtime.

Other data from the Central Statistics Office show that, since 2010, average hourly earnings in the private sector have risen 2.5 per cent whereas they have fallen 2.5 per cent in the public sector.

With the fiscal adjustment virtually completed and with a return to limited private sector wage increases, it is appropriate to consider increases in remuneration for public sector workers. However, the approach to pay determination in the public sector in the future should be much more closely linked to what is happening in the private sector than it was in the “bubble” years.

The tax and welfare systems, rather than public pay policy, should play the role of easing disparities between those on higher and on lower rates of pay.

The latest data suggest that private sector earnings may be rising at between 2 per cent and 3 per cent a year and the Department of Finance’s latest forecast envisages a growth in wage rates of nearly 3 per cent a year over the rest of the decade. It is appropriate that public sector workers should share in this increase.

To link public sector remuneration more closely to what is happening elsewhere in the economy it might be wise to combine a general increase of between 2 per cent and 3 per cent a year with an additional limited budget to offer higher increases in those areas where the public sector is having particular problems attracting recruits.

Already some areas are emerging in the public sector where it is proving difficult to hold on to workers and, with the economic recovery, this may become more pervasive.

In addition, if there are areas where current work practices make working in the public sector unattractive, for example the working conditions of junior doctors, this should be dealt with.

Public pay policy should strive for broad parity with the private sector for equivalent skills, experience and effort, and should build in a mechanism to ensure that emerging skills shortages or staff retention issues can be addressed.

Public sector workers are entitled to be remunerated on a par with their private sector colleagues, but not to return to a golden age where their rewards were significantly higher. * Benchmarking, Social Partnership and Higher Remuneration: Wage Settling Institutions and the Public-Private Sector Wage Gap in Ireland by Elish Kelly, Seamus McGuinness and Philip O’Connell in Economic & Social Review, Vol 40, No. 3 Autumn 2009 http://iti.ms/1bTuQ7W ** CSO Research Paper: Specific Analysis of the Public/Private Sector Pay Differential for National Employment Survey 2009 & 2010 Data by Kevin McCormack and Dr Mary Smyth http://iti.ms/1bTxBpZ and Comparing Public and Private Sector Pay in Ireland: Size Matters by Elish Kelly, Seamus McGuinness and Philip O’Connell in RESRI QEC winter 2012 http://iti.ms/1bTxnit