Number of homes for sale half of 2010 level, says estate agent 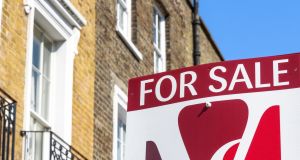 According to Sherry Fitzgerald, a steady market would expect the stock of available properties as a percentage of the total housing stock to be 4.5-6 per cent. Photograph: iStock

The number of homes for sale in the Republic is beginning to creep up, but is still at just half of levels recorded eight years ago.

Analysis from estate agency Sherry FitzGerald found that the number of properties advertised for sale on the open market increased 3 per cent around the State in the 12 months to July 2018.

The current available stock represents just 1.4 per cent of the total private housing stock in the State, at a time when renting a property is 42 per cent higher than paying off a mortgage, according to house builder Cairn Homes.

These figures are far off what would be expected in a normally functioning market. According to Sherry FitzGerald, a steady market would see the stock of available properties as a percentage of the total housing stock ranging between 4.5 per cent and 6 per cent.

“There is already evidence of a moderation in price growth in Dublin, a trend which is likely to persist in the coming months,” she said.

In Dublin, there were 5,100 properties advertised for sale, representing just 1 per cent of the county’s private housing stock. However, that represents an increase of 31 per cent on the same period in 2017.

The persistently low levels of stock “magnify the imbalance between supply and demand that exist in the capital”, the estate agency said.

Some areas, outside main urban centres, saw a contraction in supply in the period, with significant reductions recorded in Sligo, Cavan and Leitrim. Those drops come when the volume of new homes in the Republic only meets about half of demand.

While Dublin’s commuter counties of Kildare, Wicklow and Meath all recorded supply increases, the current available stock stood at 1 per cent in Meath and Kildare and 1.5 per cent in Wicklow.

The analysis again shows the difficulties in the Republic’s property market. Figures from the Banking and Payments Federation on Tuesday showed that the median deposit for first-time buyers rose almost 11 per cent in the second quarter, up to €37,500. In Dublin, however, the figures are considerably higher, at € 54,389, posing problems for renters, with the cost of rent higher than a mortgage in almost every region of the State, according to a Daft.ie report.

Last week the Economist found that house prices in Dublin were 25 per cent overvalued against income.

1 MSD buys Takeda biologics plant in Dunboyne
2 ‘Saudi Arabia is where the opportunities will happen in future’
3 State’s biggest landlord records 30% rise in rental income
4 Facebook agrees Irish wind-farm deal with Brookfield in Tipperary
5 What will the office market look like after the great remote working experiment?
6 Data centres will force State to choose between climate and investment
7 Trump’s TikTok move may have far-reaching consequences
8 Irish Times Business Awards: Local Enterprise of the Year nominees
9 Identigen founders make €12m each from sale of company
10 Why the Covid-19 crisis may push up house prices
Real news has value SUBSCRIBE