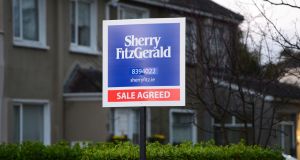 The European Commission has strongly criticised the Government’s decision to suspend property tax revaluations, as it underlines a litany of vulnerabilities in the recovering Irish economy.

In an 85-page report published at 10pm yesterday – just as polling closed in the general election – the EU executive also suggested the property tax could be extended to non-agricultural land.

After an election campaign dominated by debate on promised cuts on taxes on income, the commission’s report said the tax wedge on labour in Ireland – the amount taken in taxation – was second-lowest in the EU. Revenue from VAT was also low compared to other member states, it added.

Turning to high variable-rate mortgage charges, the report said potential new entrants into the mortgage market were probably deterred by the still-high level of non-performing loans and issues with access to property collateral underlying home loans.

The report on Ireland, which is a regular assessment published each February, said reforms undertaken in the bailout programme had not been sufficient to tackle all the legacy issues from the crash.

“These issues continue to represent vulnerabilities and imbalances that affect the economy, hinder Ireland’s investment potential and pose challenges to macroeconomic policymaking,” it said.

These observations were made even as the commission said Ireland’s “remarkable” economic rebound had broadened and gained momentum in the last two years.

In relation to the property tax, the commission said the yield remained below the EU average.

“A revaluation of self-assessed property values used to calculate local property tax liabilities was initially planned for 2016, but has been delayed by three years to November 2019,” it said.

“This decision represents a lost opportunity to broaden the tax base as residential property prices have increased substantially since the first self-assessment in 2013.”

An increase in the share of revenue from the property tax would reduce the cyclical sensitivity of government revenues and encourage more efficient allocation of land resources, the commission said.

“Extending the coverage to adjacent non-agricultural land would broaden the tax base and improve the efficiency of land use. The latter point may pertinent given current housing supply constraints,” it added.

On housing, the report said demand exceeds supply by a wide margin in major urban areas.

“Non-performing loans fell further with the recovery but the ratio remains among the highest in the euro area.”

Unemployment had fallen below the EU average but long-term unemployment and the low work intensity of households remained a matter of concern, the commission said.

“Overall, the welfare system has worked well to contain the effects of the crisis on poverty and inequality, but barriers to inclusive growth remain.

“In particular, concerns persist about inactivity traps for certain households, the high proportion of people living in households with very low work intensity, child poverty and the lack of access to affordable, full time and quality childcare.”