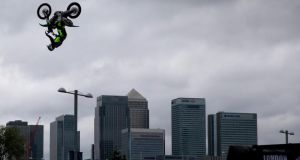 In Numbers: Standing comfortably 4 Hours of the working day that office workers should spend standing up to avoid health problems, according to scientists writing in the British Journal of Sports Medicine.

65-75 Percentage of working hours that typical office workers are estimated to spend with their bums on chairs. The writers recommend standing during phone calls and having West Wing-style “walking meetings”.

90 Percentage of office workers in Scandinavia said to have access to “sit-stand workstations”, which public health officials, worried about the impact of sedentary lifestyles, now believe should be more of a thing. Image of the week: City stunts Another day, another death-defying stunt in the City of London as British motocross rider Jamie Squibb performs a jump against the backdrop of the more corporate Canary Wharf area – the alarming manoeuvre was intended to promote the freestyle motocross world tour event Night of the Jumps, which takes place inside the O2 Arena on the nearby Greenwich Peninsula in September. Motocross stunt-riders have been known to crash in their time, though admittedly not quite as often as stock markets. Photograph: AP Photo / Matt Dunham The Lexicon: Holacracy Holacracy, according to Holacracy.org, is a new way of running an organisation “that removes power from a management hierarchy and distributes it across clear roles”, resulting in apparent day-to-day autonomy and no micro-managing. It’s all about “clear responsibilities and expectations”. Online shoe retailer Zappos has adopted the model, though some staff took a paid redundancy package in order to avoid it and chief executive Tony Hsieh admitted in a memo that “it’s not for everyone”. Holacracy might sound like a new word for self-governance, but at times like this, we’re reminded of the words of Mad Men’s Roger Sterling upon visiting an allegedly egalitarian cult: “Believe me, there is always a hierarchy.”

Getting to know: Nicandro Durante The cigar-smoking, marathon-running Nicandro Durante is a Brazilian-Italian businessman who heads British American Tobacco (BAT). He told the Financial Times in 2012 that the pleasure that cigars give him “outstrips the risks”.

Durante, who has been the top BAT man since 2011, has been busy this week spreading its tendrils in the Balkans, where it will buy TDR, Croatia’s biggest cigarette-maker, for €550 million. Durante says the deal “establishes a sustainable platform to grow our business in central Europe”, where smoking rates are still attractively high (attractive from a tobacco giant perspective, that is). Durante has this to say about the e-cigarette business opportunity: “It’s like alcohol-free beer... At first, analysts were saying in five years’ time there’s going to be no beer.” The list: Fifa sponsor statements Fifa president Sepp Blatter has exited, stage left, to spend more time with his lawyers. As he was ushered out the back door of his resignation press conference, the world football body’s top sponsors were keen to pay tribute to the Blatter era... oops, no, they were rather more quick to toast the Blatter-free future.

1 Visa The most vocal of Fifa sponsors on its corruption scandal described the resignation as a “significant first step towards rebuilding public trust”.

2 Budweiser The decision will accelerate Fifa’s efforts to “adhere to the highest ethical standards and transparency,” the brewer said of the Zurich-based organisation.

3 McDonald’s The Big Mac sellers said they were “hopeful” that offside Fifa can get fans worldwide back on side.

4 Coca-Cola Blatter’s exit will help Fifa transform itself into “a much-needed 21st century structure and institution”. (Scandals are just so 20th century.)

5 Hyundai The carmaker also viewed Blatter’s red card as “a positive first step in creating a governance structure that ensures the highest ethical standards for the sport”. So no Qatar World Cup then, right?