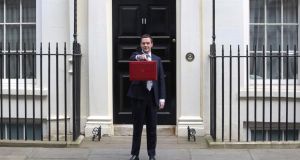 UK chancellor of the exchequer George Osborne holds the dispatch box containing the 2015 budget outside 11 Downing Street in London yesterday. He has proposed a 25 per cent tax to tackle brass-plate operations that “lack economic substance”, with the aim of raising £25 million (€34.47 million) in its first year. Photograph: Chris Ratcliffe/Bloomberg

New legislation to tackle multinationals that artificially shift profits out of the UK to cut tax bills will come into force next month, the UK chancellor of the exchequer, George Osborne, has said.

The legislation, dubbed the “Google tax”, will be included in Osborne’s final Finance Bill before the May 7th election and passed quickly into law before this House of Commons sits for the last time on March 30th.

By the end of the next parliament, it will be bringing £360 million (€496 million) into the treasury, according to Mr Osborne’s figures.

Some changes have been made to the detail of the still-unpublished legislation to clarify the rules under which credits are given for tax paid and allowed exclusions, but none of this has been revealed yet to the companies potentially affected.

In Dublin, the head of tax services at PwC Ireland, Feargal O’Rourke, said there “is a body of thought out there” which believes Mr Osborne’s new tax breaches European Union rules, but he added that this “will have to be tested in court”.

“It’s a surprising unilateral move, which runs contrary to the collective approach to the global tax debate which is being led by the OECD [Organisation for Economic Co-operation and Development],” said Mr O’Rourke, adding that US firms have given it a firm thumbs-down.

“[They] are saying that the UK is going around saying it’s ‘open for business’, but initiatives like this give a completely contrary message. It has somewhat dented their attempts to portray the UK as a pro-business location,” he said.

“The new rules will require multinational enterprises to provide high-level information to HM Revenue and Customs on their global allocation of profits and taxes paid, as well as indicators of economic activity in a country,” a treasury paper says.

Mr Osborne said the higher tax threshold would rise above inflation for the first time since 2010, while national-insurance rules that discriminate against the self-employed would be abolished.