Government moves to shore up investment after scrapping “Double Irish” 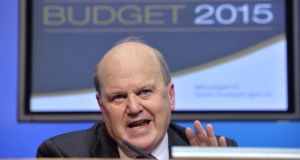 Irish officials are examining the feasibility of a 6.25 per cent rate on a new corporate tax scheme as the Government moves to shore up inward investment after its decision to scrap the controversial “Double Irish” mechanism.

While this is one of several options under discussion, such a rate would apply to a new “knowledge box” scheme in which a preferential rate would be levied on assets such as patents which are managed from Ireland and located here.

Minister for Finance Michael Noonan said in the budget on Tuesday that he was initiating a public consultation on the development of such a scheme in anticipation that it could be introduced in the Finance Bill next year.

A 6.25 per cent tax rate on intellectual property assets managed in the “knowledge box” scheme would be half the standard Irish corporate tax rate of 12.5 per cent, which itself has been a source of international controversy.

A business figure who received a report on the call said no mention was made of the tax rates which might apply to the Irish “knowledge box”.

The introduction of any such scheme, however, would be dependent on the approval of EU authorities in Brussels and on the conclusion of talks at the Organisation for Economic Co-operation and Development in Paris on an overhaul of global corporate tax rules.

The Irish “knowledge box” would be modelled on “patent box” schemes in other countries such as Britain and the Netherlands, it is understood.

In addition to the feasibility of a 6.25 per cent rate, another option under scrutiny is to levy a tax in a new I.rish scheme at a rate equivalent to the 8 per cent which applies in the Netherlands.

The British scheme may yet be subject to a state-aid inquiry by the European Commission so this field of taxation is sensitive.

In his budget speech, however, Mr Noonan said he wanted a new Irish scheme to “be best in class and at a low competitive and sustainable tax rate”.

He continued: “This intellectual property offering will be a key element in attracting future foreign direct investment in Ireland.”

In a commentary yesterday which said the budget was a “missed opportunity” for Government to reduce the national debt, credit rating agency Moody’s said it did not expect the phasing out of the “Double Irish” to result in a major exodus of multinational companies.

This was especially so “given that the Government envisages other tax incentives to retain them, including a ‘knowledge development box’”.

1 Bank leaked my loan request to family who tried to rip me off
2 Eason acquires rival Dubray Books for undisclosed sum
3 Solar panels: Are they worth the investment?
4 Average weekly wage rose to €783 in final quarter of 2019
5 Can I see my father’s previous wills?
6 Accumulated profits at David McWilliams’ media company hits €675,000
7 Siblings who became ill next to wind farm settle case
8 Fuel company loses €1.35m challenge over tax bill in ‘green diesel’ case
9 Appeals board refuses planning for 146 Clonmel homes in ‘fast track’ case
10 Are high-flying stock markets about to ‘feel the Bern’?
Real news has value SUBSCRIBE