OECD warns of dangers of Brexit without trade deal 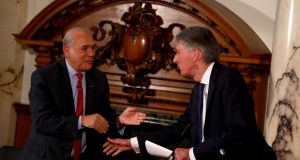 OECD secretary-general Angel Gurria shakes hands with Britain’s chancellor of the exchequer Phillip Hammond: any threat to the peace process in Northern Ireland from the introduction of a hard Border would damage UK economic growth. Photograph: Neil Hall/EPA

Leaving the European Union with no new trade deal would hurt Britain’s long-term growth, push the pound to a new low and damage the country’s credit rating, the Organisation for Economic Co-operation and Development (OECD) has warned. The Paris-based institution said that reversing Brexit through a fresh referendum would give the economy a “significant” boost.

The OECD’s annual assessment of the UK economy, which was published on Tuesday, urges Britain to seek the closest possible relationship with the EU after Brexit.

“In the absence of a free-trade agreement in 2019, switching to World Trade Organisation [WTO] rules would cut UK growth by 1.5 percentage points that year. This assumption underpins the projections in this survey, given the large uncertainty about the outcome of negotiations,” it said.

The report warns that any threat to the peace process in Northern Ireland from the introduction of a hard Border would further damage UK economic growth, as would a collapse of the Brexit negotiations in Brussels.

“A break-up of EU-UK negotiations, cancelling out the prospect of a trading relationship in the foreseeable future, would trigger an adverse reaction of financial markets, pushing the exchange rate to new lows and leading to sovereign rating downgrades.

“Business investment would seize up, and heightened price pressures would choke off private consumption. The current account deficit could be harder to finance, although its size would likely be reduced,” it said.

Conversely, the report suggests that a reversal of Brexit, either through a change of government or a second referendum, would boost growth significantly.

The UK treasury responded with a statement ruling out any reversal of last year’s referendum decision. “We are working to achieve the best deal with the EU that protects jobs and the economy. We aim to agree a free trade agreement that is comprehensive and ambitious,” it said in the statement. “We are leaving the EU and there will not be a second referendum.”

The OECD report came as inflation in Britain reached its highest level since 2012, with the Consumer Prices Index climbing to 3 per cent in September. The fall in the pound since last year’s Brexit referendum fuelled the rise in inflation, pushing up the cost of imported goods.

“Food prices and a range of transport costs helped to push up inflation in September. These effects were partly offset by clothing prices that rose less strongly than this time last year,” said Mike Prestwood, head of inflation at the Office for National Statistics.

Wages are growing at an annual rate of just 2.1 per cent, so British workers are experiencing a fall in their real income.

Bank of England governor Mark Carney told MPs on Tuesday that inflation was likely to rise further before it stabilised.

“We expected sterling to fall sharply. It did. That passes through to prices,” he said. “The sole reason that inflation has gone up as much as it has is the depreciation of sterling.”