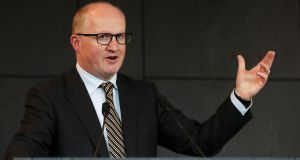 Central Bank governor Philip Lane has rejected suggestions that the economy is on the brink of another housing bubble and said the bank’s mortgage-lending rules will ultimately act as a drag on property prices.

Prof Lane said the bank’s mortgage restrictions, introduced in early 2015, had placed a number of “self-correcting brakes” in the system that would make it difficult for house prices to rise “persistently”.

Speaking at the launch of the Central Bank’s annual report, Prof Lane acknowledged the State’s housing market remained extremely volatile and that house prices were still adjusting from the boom-and-bust cycle of the past decade.

His comments come on the back of a string of indicators pointing to a pick-up in house prices in the first quarter of 2017.

The latest official figures from Central Statistics Office put the annual rate of inflation in the market at close to 11 per cent.

Prof Lane said current regulatory framework, in particular the bank’s loan-to-income requirement, which limits prospective buyers to borrowing just 3½ times their income, would act to hold back prices over the longer term.

“The 3½-times-income ceiling on mortgages means that as house prices go up, the cohort of households that can meet that condition shrinks,” he said.

Several commentators, however, have blamed the recent acceleration in house prices on the Government’s new tax-incentive scheme for first-time buyers and a loosening of the Central Bank’s lending rules for stimulating demand in the absence of an adequate supply.

Prof Lane rejected suggestions that the bank’s recent revision to the lending rules had fuelled further inflation in the market, noting “the cohort of borrowers affected by the relaxation represented only a small segment of the market”.

He said there were a number of factors driving price, including the lack of supply and the strength of the economy.

“In a very positive economic environment, the fact that house prices are going up is really not too surprising.”

Nonetheless, he said the Central Bank stood ready to step in if market dynamics required. He said the bank would be conducting an annual review of its mortgage-lending restrictions from now on.

“In line with our procedures, the calibration of the mortgage measures will be reviewed in November each year,” he said.

The Central Bank’s annual report showed it made a financial profit of €2.3 billion for 2016.

After retained earnings, a surplus income amounting to €1.8 billion will now be paid to the exchequer.

The governor said the increased level of profitability reflected the legacies of the financial crisis, which will diminish over time.

About €1.9 billion of the 2016 profit was generated by interest income and realised capital gains on its so called “special portfolio” that was acquired as a result of the liquidation of IBRC, formerly Anglo Irish Bank.

“The Central Bank has stated that it will dispose of the government bonds held in the special portfolio as soon as possible, provided conditions of financial stability permit,” he said.

He also noted that this level of profitability was likely to decline in future years as disposals of the special portfolio come to an end.

“These include risks relating to the effects of Brexit, but also the risks associated with any increase in global protectionism and/or elevated levels of risk aversion in international financial markets,” he added.