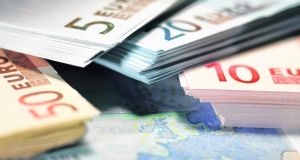 Investors are paying to lend short-term money to Ireland, as interest rates on new six month borrowing went negative on Thursday, for the first time.

The National Treasury Management Agency sold €500 million of six months treasury bills at a yield of - 0.01 per cent.

The low inflation environment and the advent of quantitative easing by the European Central Bank have driven government borrowing interest rates across Europe to new lows, and a number of countries are now raising money at negative interest rates.

The cash return to Ireland is tiny, the negative rate represents around €50,000 on the €500 million borrowed, but it again shows the significant benefits to the exchequer of being able to roll over borrowings very cheaply.

Irish short-term interest rates, as quoted on the market for trade between investors, have slipped below zero before in recent months, but this is the first time the NTMA has made an issue at below zero per cent.

Investors are prepared to buy negative yield bonds as, in some cases, this is less costly to them than putting money on deposit at the ECB, which also now levies a small cost for taking on such short-term deposits.

Treasury bills are instruments which the government uses to raise short-term cash. The last two issues have been sold at a zero interest rate, but this is the first time that the yield has gone negative. Borrowing costs for the State are now at historic lows for all periods, with 30-year borrowings having been raised recently at an interest rate of just over 1.3 per cent.