Not time to lose focus on reality of Greek return 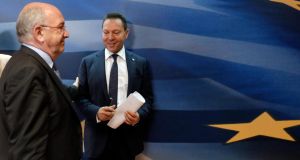 When future histories of the euro zone financial crisis are written, yesterday’s return by Greece to international bond markets will be seen as a milestone.

In a bond auction that was heavily oversubscribed, the country raised €3 billion in five-year bonds.

But, like all key dates in history, the reality surrounding the event is more nuanced.

First, the country’s return has been helped by the overall investor climate which has seen a sharp demand for so-called peripheral euro zone debt in recent months, boosted in part by a sell-off in emerging markets.

The euro zone’s bail-out countries have all seen bond yields fall in recent months, amid strong demand, with the promise of a higher-yielding investment likely to have attracted some buyers yesterday.

The government is also taking advantage of the generally benign market conditions across Europe as investors increasingly expect ECB president Mario Draghi to deliver on his promise to “do whatever it takes” to preserve the euro , potentially through a round of quantitative easing.

The government may have also felt emboldened to seize the initiative following an intensive few weeks in Athens.

Just three weeks ago, the country finally resolved a six-month stand-off with the Troika about further austerity measures, unlocking one of the final major instalments of the second bailout.

The following week, the government pushed through a sprawling legislative package, outlining a range of fresh reform measures, in the Greek parliament.

As protestors gathered outside the parliament, the Opposition party proposed and lost a no-confidence vote in the finance minister, and the government’s majority was reduced to two as the highly controversial package was passed.

The focus on Greece continued last week as euro zone finance ministers met in Athens to sign off on the €8.9 billion disbursement for Greece.

But huge challenges still remain for the Greek economy. Despite the strong appetite for its bonds yesterday, the country’s debt is still rated as junk.

Domestic spending is still extremely subdued as the country continues to struggle under the weight of massive austerity measures, and the export sector is uninspiring.

The risk of default may have receded, but question-marks over the long-term fundamentals of the Greek economy still unsettle many investors, despite the attraction of a high-yield asset.

The Greek government used last week’s euro group meeting in Athens to stress the progress the country has made. This includes the return to a primary surplus and the ability of Greek banks to tap the markets successfully in recent weeks.

The key issue in the next few months will be whether this will be enough to stave off a third bailout when the EU’s bailout commitments finish at the end of the year.