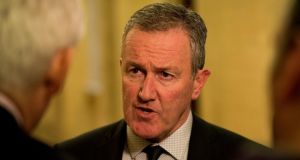 The comment from the Sinn Féín MLA signals a major change in policy direction for the new Executive.

In an interview with BBC Northern Ireland, Mr Murphy said the long-running campaign to secure a lower rate of corporation tax for the North has, in his opinion, “given Brexit and the change in economic and political circumstances, reduced in significance”.

Business and political leaders had previously argued that Northern Ireland was at a significant disadvantage when it came to attracting foreign direct investment because the UK’s main rate of corporation tax was much higher than the 12.5 per cent rate in the Republic.

The current UK rate is 19 per cent, although the UK prime minister Boris Johnson has pledged to further reduce the UK rate after Brexit to encourage new foreign investors to establish operations in the UK.

According to Mr Murphy, one of the key issues revolves around whether the North could truly afford a lower corporation tax rate. He told BBC NI that Sinn Féin had always insisted that there had to be “a very honest assessment of what a cut would cost”.

For Northern Ireland to secure a reduction in current corporation tax rate from London, it would have to agree to a reduction in the block grant it receives from the UK government to fund public services in the North.

Mr Murphy said the “hit” the Executive’s finances would have taken as a result would impact public services in the North.

He said the Executive currently finds itself “struggling just to provide the basic public services”, and he believes the issue of corporation tax has now receded.

“That’s not to say that others may not raise it again but it’s not something that I’m actively pursuing.”

The Finance Minister’s stance may come as a disappointment to some in the North’s business community.

Last year the Chartered Accountants Ulster Society said that it believed “the ship had not sailed” on a special Northern Ireland corporation tax rate.

Richard Gillan, Ulster Society chairman, said last year that in light of Brexit and the impact that it could have on Northern Ireland, “the economic opportunity originally presented by corporation tax devolution now takes on added importance”.

“Our message is clear – finish the job of devolving corporation tax and take away some of the impending pain of Brexit,” Mr Gillan stated.