Next government will have scope to increase spending 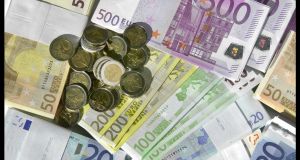 Eurostat’s decision could mean the next government will be under marginally less pressure in coming years to keep public spending in check. Photograph: Alan Betson

The next government will have a little more scope to increase public spending than was assumed in the weeks of talks since the February election, The Irish Times has learned.

Amid the stalemate between Fine Gael and Fianna Fáil, an arcane decision by the EU statistical agency could mean the next administration will be under marginally less pressure in coming years to keep public spending in check.

Deep divisions over Irish Water remain the primary source of tension between the parties. If the schism is overcome, however, the Eurostat decision might ease the path to an eventual deal by providing some leeway to boost spending by a little more than previously anticipated.

At issue is the designation for statistical purposes of a share transaction last year in the nationalised Allied Irish Banks.

The redemption of AIB preference shares and their conversion into ordinary shares yielded €1.6 billion for the exchequer. In view of the State’s ownership of AIB, the transaction itself was classified as a general government expenditure.

This unexpected development meant that end-2015 budget deficit was higher than expected at 2.3 per cent of GDP, almost one percentage point more than the outgoing Government’s forecast.

The AIB transaction was once-off. Still, the Government is proceeding on the basis that the money in question can be rolled into the permanent pool of allowable expenditure under complex EU budgetary rules.

This means the overall 2015 spending base carried forward into 2016 – the “expenditure benchmark” – is bigger than calculated in the budget last October.

Not all the additional money can be spent, as Dublin is required under stringent EU rules to maintain progress towards the elimination of budget deficits.

“It does have an effect on the expenditure benchmark,” said the Department of Finance spokesman in reference to the AIB decision.

“But it doesn’t necessarily follow that this can be used, because we need to consider the balanced budget rule and all expenditures need to be considered in structural terms.”

With overall tax returns on the rise, however, the statistical ruling may provide some scope to tackle a health spending overrun this year and other spending pressures without breaching European budget rules.

Strictly speaking, the rules prevent the allocation of supplementary budgets. Still, the deployment of a wider spending base for the year may provide scope to circumvent that restriction.

Under previous EU guidelines Dublin had been to obliged to eliminate the structural deficit by 2019. However, the target was eased to allow Ireland to target a “medium-term objective” of a 0.5 per cent structural deficit in 2019.

These forecasts will be revised in the “stability programme update”, an annual filing to Brussels in which the Government adopts new forecasts and sets out the opening fiscal position for the budget process. This submission must be made by Thursday of this week but a delay is in prospect due to wrangling over the formation of the government.