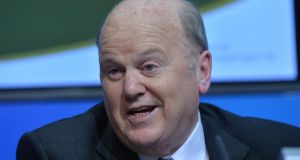 Michael Noonan: expected to go to Cabinet on Tuesday with a recommendation. Photograph: Alan Betson

Minister for Finance Michael Noonan is expected to go to Cabinet on Tuesday with a recommendation on a successor to outgoing Central Bank governor Patrick Honohan.

Sources close to the decision say it is likely to be a very close call between the two remaining candidates: Robert Watt, current secretary general at the Department of Public Expenditure and Reform, and Philip Lane, Whately professor of political economy at Trinity College Dublin.

Both bring very different backgrounds and skillsets to the process and it remains unclear what recommendation the interview committee has sent to Mr Noonan.

The Central Bank post ranks among the most prestigious in the public service. The new governor will be tasked with managing an organisation with 1,500 employees and faces a complex agenda in regulating, attracting and holding on to staff.

In addition to running the Dame Street institution, the governor sits on the controlling council of the European Central Bank, which sets euro zone interest rates.

Prof Lane, highly regarded in economics circles, is considered a strong contender. He has a PhD in economics from Harvard and was professor of international macroeconomics at TCD before taking up his current position in 2012.