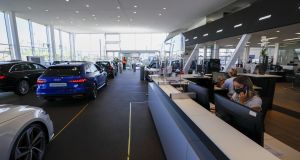 Showrooms are starting to reopen in Germany, while manufacturing plants across Europe are tentatively restarting production. Photographer: Alex Kraus/Bloomberg

Motor tax revenues generated €6.2 billion for the Irish Exchequer last year, according to a new industry report. The Irish State got €1.7 billion from Vehicle Registration Tax on new and imported car, and VAT on servicing parts and repairs. It also got €3.5 billion from fuel taxes and €900 million from annual motor taxes.

According to figures from the European Automobile Manufacturers’ Association (ACEA), motor vehicles generate more than €440.4 billion in taxation for national governments in the major EU markets and the UK, with this tax revenue increasing by almost 3 per cent compared to the previous year, it reports in its 2020 Tax Guide.

The guide compiles the various taxes collected, from those on the purchase of vehicles, to those on ownership, such as annual motor tax and fuel taxes.

The report shows that 24 countries levy car taxes partially or totally based on the CO2 emissions and/or fuel consumption of a vehicle. T

It also shows that financial supports for electric or hybrid vehicles are available in 24 out of the 27 EU states. However, just 13 member states offer purchase incentives, such as bonus payments or premiums, to buyers of electric cars. Most countries grant only tax reductions or exemptions.

According to Eric-Mark Huitema, ACEA director general, the scale of the tax income derived from the automotive sector shows “it is clearly paramount to the overall health of the EU economy, and government budgets in particular, that we can successfully re-launch our industry in the aftermath of the COVID-19 crisis.”

Several auto manufacturers have started to reopen plants and resume production, while showrooms are starting to reopen in the first wave of easing lockdowns in some European states.

Several companies have called for governments to introduce scrappage schemes to revive sales. Ensuring cars are sold to customers is critical for the production ramp-up, VW brand chief operating officer Ralf Brandstatter said on Monday. “A sales support can be a sensible contribution to climate protection,” he added, suggesting that the programme could be geared toward a low CO2 output.

National accounts record the calm before the storm 17:18
Backers agree new $60m investment in Limerick aviation lessor 16:58
Passengers face queuing in car parks at Dublin Airport 16:24
US jobs market rebounds unexpectedly 16:22
Wild Geese: ‘I love to introduce and inspire people of all ages to the mountains and cliffs’ 16:13

1 Passengers face queuing in car parks at Dublin Airport
2 Student accommodation sector set for harsh Covid-19 lesson
3 Major credit union plans to limit savings accounts to €40,000
4 Penneys will not reopen on Monday despite expected changes to lockdown rules
5 Backers agree new $60m investment in Limerick aviation lessor
6 Brother is dragging his heels as executor of uncle’s will - is there anything I can do?
7 Tesla’s Elon Musk calls for breakup of Amazon in tweet
8 Bad posture working from home easy to acquire
9 Press Up launches legal action against insurer RSA
10 Irish economy grows 1.2% in first quarter as exports offset Covid-19 impact
Real news has value SUBSCRIBE