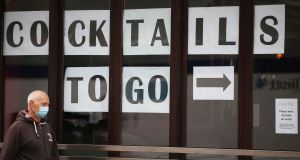 Having risen for three straight months after lockdown, the KBC Bank sentiment index fell to a reading of 52.6 in October, down from 60.7 in September.

The monthly drop of 8.1 points was the second largest in the past year, broadly similar to the initial reaction to the pandemic in the March, but nothing like the colossal 34.7 point decline in April, which coincided with the first lockdown.

The latest reading pointed to increased concern about the potential impact on household finances and jobs of a renewed surge in coronavirus cases and the prospect of related restrictions on economic activity, said KBC Bank Ireland economist Austin Hughes.

The survey was carried out in advance of the move to Level 5 restrictions, which might have triggered an even bigger drop.

“The current level of the sentiment survey points to a very nervous Irish consumer,” Mr Hughes said, noting that all five elements report were markedly weaker in October than in September.

“Some further perspective on the degree of discomfort is suggested by the fact that, apart from the slump seen in April/May, it is the lowest level of the sentiment survey since December 2012 and in the bottom 10 per cent of readings in the near twenty five years of the survey,” he said.

“The largest weakening was seen in consumers’ expectations for their financial circumstances over the next twelve months and likely reflects increased nervousness about the lasting impact of the coronavirus and related restrictions on economic activity on income prospects,” he said.

Mr Hughes said that those surveyed after Budget 2021 were marginally less negative about the outlook for household finances than those who responded before the Budget.

“As there was a progressive deterioration in health-related news through the survey period, this might suggest some modest positive impact on consumer confidence from the measures announced in Budget 2021,” he said.

The decline in Irish sentiment in October contrasts with a modest rise in the preliminary reading of the comparable US confidence measure .

KBC Bank said US consumers have proven less sensitive to adverse news in relation to the coronavirus and appear more focused on a significant if uneven rebound in the US economy and a notably more pronounced improvement in asset prices.

“As we also previously suggested, financial and economic scarring from the previous crisis as well as significantly stronger health-related restrictions may have prompted a larger sentiment impact in Ireland than in the US,” Mr Hughes said.

The October survey also saw consumers mark down the outlook for the jobs market substantially.

“In circumstances where many recent economic releases have been positive, this likely reflects the expected impact on employment of localised ‘lockdowns’ in recent months and the growing prospect of a more generalised increase in restrictions through the survey period,” Mr Hughes said.

“It appears that consumers sense a very palpable link between lockdowns and layoffs.”