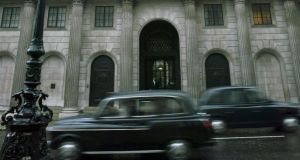 The Bank of England. The availability of more up-to-date snapshots of how the UK economy is faring should be good news for the bank’s monetary policy committee, which sets interest rates.

In the quest to provide more timely, and higher-quality snapshots of how the nation is faring financially, UK government statisticians yesterday released their first-ever monthly estimate of gross domestic product (GDP).

The data showed that growth in May, boosted by the start of the warm weather and the royal wedding celebrations, rebounded to 0.3 per cent, lifting rolling three-month figures for March to May to 0.2 per cent, a recovery from the stagnation seen in the three months from February to April.

Once again, however, it’s the services sector – which accounts for as much as 80 per cent of the economy – that is fuelling growth, advancing by 0.4 per cent in May.

That compared with a surprise fall of 0.4 per cent in industrial output and a weaker-than-expected rise in manufacturing of 0.4 per cent. Construction, meanwhile, staged a strong recovery from the devastation caused by “the beast from the east” earlier in the year, rebounding by 2.9 per cent.

Britain is the world’s first major economy to publish monthly growth estimates, a move the Office for National Statistics says has been made possible by significant improvements in the way the data is collected and analysed.

The number crunchers are confident the new system will see fewer revisions to quarterly growth estimates than in past years, which have frequently seen significant changes made to preliminary figures.

The availability of more up-to-date snapshots of how the economy is faring should be good news for the Bank of England’s monetary policy committee, which sets interest rates. In the short term, however, it leaves them without the full picture for their next meeting, on August 2nd.

Under the old statistical timetable, they would have seen second-quarter growth estimates before making their decision, but those will not now be published until later in August.

As usual, economists were divided on whether a rate hike is more, or less, likely after yesterday’s data. At their last meeting, in June, three of the nine members of the committee voted for an immediate rate rise, from 0.5 per cent to 0.75 per cent, including the bank’s chief economist, Andy Haldane. Will the stronger showing in May be enough to convince more committee members to switch sides, or will the majority once again opt to wait and see?

Much depends on what happens over the next few weeks. The feel-good factor sparked by the heatwave and England’s success in the World Cup has sent jubilant shoppers flocking to the stores to buy beer and big-screen televisions – but how long will that last, particularly if football doesn’t come home after all?

The biggest unknown, however, remains the political chaos over Brexit. As Monday’s shambolic events in Westminster demonstrated, the outcome of that is harder to predict than either the weather – or the World Cup.

Marks & Spencer was milking its role as “official tailor to the England team” for all it was worth yesterday as it held its annual shareholder meeting at the home of English football, Wembley Stadium.

A huge digital sign over the entrance to the stadium proclaimed “Bring it home” complete with M&S’s “luckywaistcoat” hashtag. Supplies of the waistcoat, as modelled in Russia by England manager Gareth Southgate, have virtually sold out ahead of tonight’s match against Croatia although none of the retailer’s directors appeared to be wearing one yesterday. Saving them for the customers, perhaps?

While waistcoats will have given sales a brief boost, the wider picture at M&S remains gloomy. In May, it announced it would close 100 stores over the next few years and yesterday new chairman Archie Norman warned shareholders that more cutbacks could be on the way. “I can’t tell you it won’t be the last,” he said.

Notably absent from the meeting (waistcoats aside) was any update on current trading. The group last reported figures to the City in May and had promised further news at the meeting. Last Friday, however, it emailed analysts to say it was scrapping the agm update in favour of concentrating on the longer-term outlook.

City rules do not oblige a company to give a trading update at its annual meeting but the last-minute decision raised eyebrows among analysts. If the sales news had been good, then surely M&S would have wanted to shout about it?