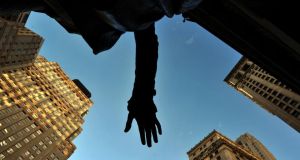 The Fed has said it will raise rates only when it sees a sustained recovery in the economy. Photograph: Getty Images

US stocks rose sharply on Thursday, a day after posting their biggest one-day gain in four years, as data showed the US economy grew faster in the second quarter than initially thought. In Ireland, the Iseq has added 3 per cent in Thursday trade.

Annual US gross domestic product growth was revised up to 3.7 per cent from the 2.3 per cent rate reported last month. Other data showed jobless claims fell more than expected last week, pointing to a steadily firming labour market.

While strong data points to increased chances of an interest rate hike in September, some investors said the recent volatility in markets triggered by fears of slowing growth in China could force the US Federal Reserve to hold back on a rate increase next month.

“Despite the good GDP numbers that we saw today, September largely seems off the table because of the turmoil that we’ve seen in the past week,” said Scott Brown, chief economist at Raymond James in Florida.

However, he said recent data “certainly points to a possibility of a rate hike this year.”

The market surged on Wednesday after New York Fed president William Dudley said the case for a September rate hike seemed “less compelling” than before.

The Fed, which meets on September 16th and 17th, has said it will raise rates only when it sees a sustained recovery in the economy.

A rate hike could put a stop to easy money that has helped fuel global markets in the past few years.

Kansas City Federal Reserve president Esther George, who has been arguing for a near-term US rate hike, said the Fed should now take a “wait and see” approach to hiking rates due to market volatility and China’s economic slowdown.

Investors will be keeping a sharp eye on an annual conference starting on Thursday of some of the world’s top central bankers in Jackson Hole, Wyoming for further clues on the timing of a US interest rate hike.

The market also got a rare dose of good news from China, where stocks snapped a brutal five-day losing streak.