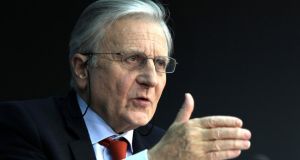 Jean-Claude Trichet: “I am sure that you are aware that a swift response is needed before markets open next week”

Tánaiste and Minister of Finance

As you are aware from my previous letter dated 15 October, the provision of Emergency Liquidity Assistance (ELA) by the Central Bank of Ireland, as by any other national central bank of the Eurosystem, is closely monitored by the Governing Council of the European Central Bank (ECB) as it may interfere with the objectives and tasks of the Eurosystem and may contravene the prohibition of monetary financing.

Therefore, whenever ELA is provided in significant amounts, the Governing Council needs to assess whether it is appropriate to impose specific conditions in order to protect the integrity of our monetary policy. In addition, in order to ensure compliance with the prohibition of monetary financing, it is essential to ensure that ELA recipient institutions continue to be solvent.

As I indicated at the recent Eurogroup meeting, the exposure of the Eurosystem and of the Central Bank of Ireland vis-a-vis Irish financial institutions has risen significantly over the past few months to levels that we consider with great concern. Recent developments can only add to these concerns. As Patrick Honohan knows, the Governing Council has been asked yesterday to authorise new liquidity assistance, which it did.

But all these considerations have implications for the assessment of the solvency of the institutions which are currently receiving ELA. It is the position of the Governing Council that it is only if we receive in writing a commitment from the Irish government vis-a-vis the Eurosystem on the four following points that we can authorise further provisions of ELA to Irish financial institutions: 1) The Irish government shall send a request for financial support to the Eurogroup; 2) The request shall include the commitment to undertake decisive actions in the areas of fiscal consolidation, structural reforms and financial sector restructuring, in agreement with the European Commission, the International Monetary Fund and the ECB; 3) The plan for the restructuring of the Irish financial sector shall include the provision of the necessary capital to those Irish banks needing it and will be funded by the financial resources provided at the European and international level to the Irish government as well as by financial means currently available to the lrish government, including existing cash reserves of the Irish government; 4) The repayment of the funds provided in the form of ELA shall be fully guaranteed by the Irish government, which would ensure the payment of immediate compensation to the Central Bank of Ireland in the event of missed payments on the side of the recipient institutions.

I am sure that you are aware that a swift response is needed before markets open next week, as evidenced by recent market tensions which may further escalate, possibly in a disruptive way, if no concrete action is taken by the Irish government on the points I mention above.

Besides the issue of the provision of ELA, the Governing Council of the ECB is extremely concerned about the very large overall credit exposure of the Eurosystem towards the Irish banking system. The Governing Council constantly monitors the credit granted to the banking system not only in Ireland but in all euro area countries, and in particular the size of Eurosystem exposures to individual banks, the financial soundness of these banks and the collateral they provide to the Eurosystem.

The assessment of the Governing Council on the appropriateness of the Eurosystem’s exposure to Irish banks will essentially depend on rapid and decisive progress in the formulation of a concrete action plan in the areas which have been mentioned in this letter and in its subsequent implementation.