Jean-Claude Trichet and the Irish bailout: A timeline

From moment of bank guarantee, Ireland’s economic fate was tied to troika 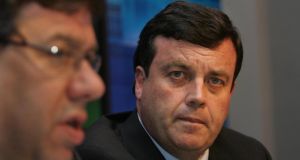 Former taoiseach Brian Cowen and then minister for finance Brian Lenihan at a briefing on public spending measures in Dublin in 2008. Photograph: Matt Kavanagh/The Irish Times

All government ministers are ordered to come up with additional cuts in departmental spending following the publication of official figures showing a continuing collapse in tax revenues. The exchequer deficit has reached €9.4 billion and the tax take is behind projections made at the start of the year. Taoiseach Brian Cowen says the government will make the necessary decisions to stabilise the public finances or there will be “catastrophic consequences”.

European Central Bank (ECB) president Jean-Claude Trichet says “hard decisions” will have to be taken to overcome the “severe challenges” facing the Irish economy. During a visit to Dublin, he says he is “optimistic” about the prospects for the Irish economy, but cautions that the government must adopt an economic policy that “convincingly reduces future public deficits” and recovers lost competitiveness.

While praising the government’s efforts to stabilise the economy to date, Trichet says further action is required to recalibrate the economy and reinforce competitiveness. He singles out Ireland and Greece as countries in which more structural reforms are required to foster employment and growth.

Trichet says the Irish government alone is responsible for dealing with the mounting costs of supporting the now nationalised Anglo Irish Bank. He declines to discuss escalating concern that the rising cost of the Anglo bailout, which stands at €25 billion, is creating an intolerable burden on taxpayers and undermining market confidence in the government’s overall economic plan.

The ECB declines to comment on a report in a leading German business newspaper that says the bank considered activating a rescue scheme for Ireland but decided against going down that road. A spokesman for the Department of Finance dismisses the report, saying it has no basis whatsoever in fact.

Trichet moves to shore up confidence in the government’s economic plan as Irish borrowing costs spike to a new record. He tells reporters the Cabinet’s decision to front-load the €15 billion four-year austerity plan with a €6 billion package next year is of “extreme importance”, and emphasises the requirement for the Irish authorities “to be alert permanently” as they try to balance the books.

The government again insists it neither needs nor is discussing financial aid and denies reports the European Union and Germany are pressing it to accept emergency funding.

EU and IMF negotiators arrive in Dublin to intensify talks on a rescue plan for Ireland. As pressure builds from Europe for an immediate application for external aid, Dublin campaigns to minimise any funding it draws down in a bid to ensure the terms are not too onerous. Negotiators on the other side are keen to determine the exact scale of the funding requirement for the banks.

Trichet writes to Brian Lenihan and explicitly threatens to cut off emergency funding from the Irish banking system unless Ireland immediately applies for a bailout and agrees a programme of austerity and bank recapitalisation.

Ireland enters the bailout programme as the EU and the government announce they have agreed the State will be provided with €85 billion in financial support.

Trichet urges Irish political leaders to proceed with the agreed terms of the rescue plan. His comments come as Fine Gael and Labour say they want to renegotiate key elements of the deal. Trichet says the ECB view is that the execution of the rescue package is absolutely essential for Ireland’s credibility.

Brian Lenihan claims the ECB forced Ireland into taking a bailout and rejects claims by a senior ECB figure that the bank warned Ireland in mid-2010 of the dangers it faced.

July 21st 2011: Taoiseach Enda Kenny announces the cost of Ireland’s international bailout is to drop by up to €800 million after euro zone leaders agree a larger cut than anticipated in the interest rate on rescue loans.

Trichet rules out supporting Minister for Finance Michael Noonan in his push to avoid repaying some of the debt owed by Anglo Irish Bank and Irish Nationwide Building Society.

EU finance ministers sign off on a package of interest rate cuts on Ireland’s bailout which deliver savings of up to €10 billion.

Trichet chairs his final rate-setting meeting of the ECB before handing the keys over to the Italian Mario Draghi. Trichet says of his time: “We were never in calm waters.”

Trichet, now former ECB chief, challenges the argument that the bank pushed Ireland into its bailout programme against the wishes of the then government. “I think that the overall sentiment of all the responsible persons in Ireland, those who were at the helm, was that they really were needing some help in terms of help of the IMF and help of the other Europeans,” he says.

As Ireland nears the end of the bailout programme, ECB president Mario Draghi praises the State’s efforts to repair its public finances and banking sector saying the country has improved “on all fronts” since the financial crisis.

Taoiseach Enda Kenny marks the end of the State’s three-year troika bailout programme in a televised address to the nation. The State received the last tranche of funds from the €85 billion loan two days earlier when Michael Noonan branded Irish citizens as the “real heroes and heroines” of the story.

The Irish Times publishes the letter from Trichet to Lenihan in which the ECB explicitly threatens to cut off emergency funding from the Irish banking system unless Ireland immediately applies for a bailout.

1 Tobacco makers still trying to make a mint from Irish menthol market
2 Ryanair expects air fares to fall when flights take off again
3 ‘I’m so lucky to be in the Caribbean – a million miles from Derry Girls’
4 Household savings soar as consumers stop spending
5 Michael Smurfit: ‘I asked Trump to invite me to the White House for my 80th birthday’
6 Joint accounts: if one of us dies, can the other access the money?
7 Ireland stands to benefit in a big way from investing in public transport
8 ‘The recovery needs to be a full-scale economic renewal’
9 Pepsi to make €338m from disposal of Irish company
10 ‘Never mind GDP; the most fundamental job of any leader is to keep his people alive’
Real news has value SUBSCRIBE