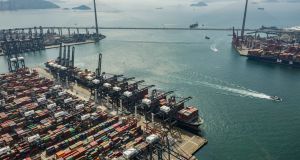 Hong Kong’s conainer terminal. WTO economists said on Tuesday that global trade grew by 3 per cent in 2018 - a big downgrade compared to a forecast of 3.9 per cent growth last September.

The World Trade Organisation has warned that global trade would face “strong headwinds” over the next two years as it reported that commercial tensions, a slowdown in the major economies and financial volatility had already triggered a sharp drop in trade growth last year.

WTO economists said on Tuesday that global trade grew by 3 per cent in 2018 - a big downgrade compared to a forecast of 3.9 per cent growth last September. They added that the slowdown would continue this year, with expected growth of 2.6 per cent.

“With trade tensions running high, no one should be surprised by this outlook. Trade cannot play its full role in driving growth when we see such high levels of uncertainty,” said Roberto Azevêdo, the director-general of the WTO.

“It is increasingly urgent that we resolve tensions and focus on charting a positive path forward for global trade which responds to the real challenges in today’s economy - such as the technological revolution and the imperative of creating jobs and boosting development,” he said. – Copyright The Financial Times Limited 2019