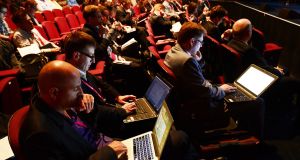 Irish consumers are now spending €850,000 an hour online, up 20 per cent on four years ago, making Ireland one of the fastest growing digital economies in the world.

The figure was contained in one of two reports, published on Tuesday by Minister for Communications Denis Naughten, highlighting the burgeoning strength of e-commerce in Ireland.

The first report on the macro-economic impact of the internet indicated the digital economy here now encompassed 6 per cent of gross domestic product (GDP), equating to €12.3 billion.

However, on the current growth trajectory this will expand to about €21.4 billion or nearly 8 per cent of GDP by 2020.

The report, carried out by the Indecon consultancy, said the digital economy had an employment footprint of 116,000 direct and indirect jobs, of which 68,000 are directly linked to digital.

The report indicated approximately one in seven Irish adults generate a supplementary income via the internet.

The largest single contributor to the internet part of the economy was online consumer spending, which amounted to about €7.5 billion annually. This was expected to grow bya further 25 per cent over the next three to five years.

The study, commissioned by Minster Naughten’s department, also highlighted the fact that 88 per cent of Irish consumers research products online before buying them, compared to 79 per cent across the EU.

The European Commission, which is advancing plans for a unified digital market in Europe, recently described the digital economy as the single most important driver of innovation, competitiveness and growth.

Mr Naughten’s second report highlighted the potential impact for small businesses of opening up their operations to online consumers.

The Trading Online Enterprise Impacts Report, which was based on survey of 600 small businesses, indicated that sales on average grew by 21 per cent while 84 per cent of respondents said they experienced an increase in customer enquiries.

The report cited recent European Commission data which show that 32 per cent of Irish SMEs are trading online, above the EU average of 26 per cent, albeit the study only assessed firms with 10 staff or more.

Mr Naughten, who was speaking at an event in Dublin Castle to highlight the success of the Government’s trading online voucher scheme, said: “These reports give us a snapshot into just how important the digital economy is to householders and businesses, no matter where they are located in Ireland.”

“As the digital economy grows, it is essential that the benefits are felt in every city, provincial town and rural area,” he said.

Despite the opportunities presented by the digital revolution, many parts of Ireland are without good quality broadband.

Mr Naughten said the delivery of the latest high-speed broadband network for rural Ireland, uder the auspices of the National Broadband Plan, was a top priority for Government.