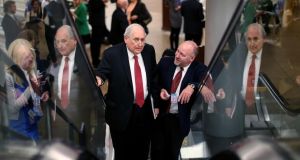 US Senator Carl Levin talks to reporters as he climbs an escalator at the US Capitol in Washington, DC. Mr Levin labelled Ireland a “tax haven” during the hearing of the Senate permanent subcommittee on investigations, of which the Michigan senator is chairman. Photograph: Mark Wilson/Getty Images

Two US senators who have sharply criticised Ireland’s loose tax laws for allowing American multinationals to avoid taxes have described the Government’s promise to close a loophole as “encouraging.”

Democrat Carl Levin and Republican John McCain said they hoped yesterday’s pledge by Minister for Finance Michael Noonan to tackle the use of “stateless” Irish companies by US multinationals to lower their taxes would show that Ireland is “ready to close the door on these egregious corporate tax abuses.”

The Government plans to introduce a change that will force Irish companies to declare tax residency in a different jurisdiction or else be held liable for the Irish corporate tax rate of 12.5 per cent in 2015.

Apple was criticised by the two senators at a Congressional hearing in May for using Irish companies, which were not tax resident anywhere, to pay less than 2 per cent tax on $44 billion of non-US income over four years.

“Ireland’s promise to reform its tax rules to stop multinationals from using Irish subsidiaries to escape or defer paying taxes anywhere in the world is encouraging,” the senators said in a joint statement released last night in response to Mr Noonan’s comments.

“Important questions do remain, however, including whether the new rules will continue to allow Irish subsidiaries to dodge taxes by, for example, excluding substantial income from the 12 per cent Irish tax rate, calculating taxable income in ways that produce a lower effective tax rate, or simply declaring tax residency with no corporate tax.

“Hopefully, the answers will demonstrate that Ireland is ready to close the door on these egregious corporate tax abuses enabling multinational tax avoidance.”

Mr Levin labelled Ireland a “tax haven” during the hearing of the Senate permanent subcommittee on investigations, of which the Michigan senator is chairman.

The Government has drawn fire from tax campaigners over companies such as Apple, Facebook and Google using Irish companies to exploit international tax loopholes to avoid multi-billion dollar tax bills.

The Minister’s announcement marks the first move to crack down on tax avoidance by multinationals, yielding to pressure to rein in sharp global tax practices followed by major corporations.

“Let me be crystal clear, Ireland wants to be part of the solution to this global tax challenge, not part of the problem,” said the Minister in his budget speech.

The American Chamber of Commerce Ireland said the changes announced in the budget relating to tax residency rules should not adversely affect the existing operation of multinational companies in Ireland, or the country’s competitiveness as a location for foreign direct investment.

The chamber’s chairwoman Anna Scally said the release of a document outlining Ireland’s international tax strategy as part of the budget would provide certainty, and would be “welcomed by potential and current investors”.