Philips to return €1.5bn to shareholders 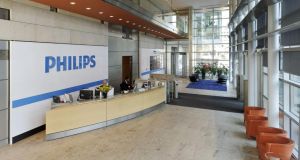 Philips raised most of its financial targets and announced plans to return €1.5 billion to shareholders, saying it would reap the benefits of a two-year revamp to focus on healthcare, lighting and consumer appliances.

However, the Dutch group warned of tough conditions in many of its markets and the new goals fell short of some analysts’ hopes, sending its shares lower in early trading this morning.

“(The) new targets appear a little conservative,” Morgan Stanley analysts said in a research note, adding there had been hopes for a share buyback closer to €2 billion.

Over the past two years, Philips has sold off much of its consumer electronics business - divesting its television, audio and video operations where it was struggling to compete with lower-cost Asian manufacturers, to focus on more profitable home appliances such as soup mixers and electric toothbrushes, as well as lighting for homes and offices, and healthcare.

Healthcare has become a particularly important market, with demand for new ultrasound and scanning products helping it to become the leading medical equipment supplier in the United States and a top-three producer of hospital equipment worldwide.

The group this morning said it was targeting a margin of 11-12 per cent on earnings before interest, tax and amortisation (Ebita) for 2014-2016, compared with the 10-12 per cent it is aiming for this financial year.

It is also targeting a return on invested capital of at least 14 per cent, compared with this year’s 12-14 per cent.

“We see substantial opportunities for profitable growth for 2016 and beyond,” chief executive Frans van Houten said.

However, the group also kept its sales growth target of 4-6 per cent unchanged and said it was feeling the impact of uncertainty over healthcare spending and reforms in the United States, weak economies and construction markets in Europe, as well as currency volatility in Japan, India and Indonesia.

“We can achieve the 2013 targets,” Mr van Houten told journalists on a conference call. “It’s hard work and we have a lot to do in the fourth quarter.”

“Given investor skepticism on Philips, quarterly execution is more important than setting targets,” they said in a note.

The stock trades at 14.9 times forecast earnings, a 15 per cent premium to the average of its peers including Electrolux , Alstom and Osram Licht, according to StarMine SmartEstimates.

Philips said it would buy back €1.5 billion of shares over the next two to three years, starting in October.

It is aiming for an EBITA margin of 9-11 per cent in lighting and 11-13 per cent in its consumer division.

1 Ireland has EU’s most progressive tax system, study finds
2 MEPs reject Central Bank’s Gerry Cross for key banking role
3 Promises promises: There probably won’t be enough cash to meet election pledges
4 C&AG names public sector bodies that failed to file financial statements in 2018
5 Who are Ireland’s 17 billionaires?
6 Davos: OECD confident on digital tax deal as France takes swipe at Ireland
7 Are there annual limits on inheritances or gifts to a child?
8 On your bike: Dropbox backs Dublin Cycling Campaign
9 Are you a Monica, Joey or Chandler when it comes to your data privacy?
10 Aldi to implement living wage for store employees
Real news has value SUBSCRIBE