Loans adjustment to be decided in May

Noonan hopeful of progress at meeting of euro finance ministers 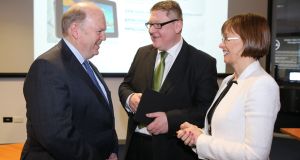 A final decision on the adjustment of Ireland and Portugal’s bailout loans will not be reached until the May meeting of European finance ministers, Minister for Finance Michael Noonan has confirmed.

Speaking in Limerick yesterday, Mr Noonan said he had never given any assurance that the deal would be signed off in April.

“I don’t think I ever said that, but other people gave an indication that it might come to a head in Dublin.”

Mr Noonan said he hopes progress will be made at this week’s meeting of euro zone finance ministers in Dublin, but insisted it was an “informal Ecofin”.

“There will certainly be discussions about the extension of maturities at the meetings on Friday but the meeting on Friday is called the informal EcoFin and at the informal ecofin while you can progress matters to the point of a solution, you can’t take a formal decision because it’s informal, so whatever happens or whatever progress is made on Friday, the formal decision won’t be until the May Ecofin.”

While a formal decision cannot be made at Friday’s meeting, senior EU figures, including economics and monetary affairs commissioner Olli Rehn, have consistently indicated that the issue would be concluded at the April meeting. As reported in The Irish Times last week, final agreement is now likely to be delayed.

Mr Noonan’s comments came as Portugal upped the pressure on Europe to sanction the adjustment of the loans, ahead of Friday’s scheduled gathering. In a televised address on Sunday evening, Portuguese prime minister Pedro Passos Coelho said that agreement on an adjustment to the bailout loans was “decisive” for the country.

“The commission supports that such a decision be taken soon,” it added in a statement.

Portugal is likely to take centre stage at the meeting of euro zone finance ministers following the rejection by the constitutional court of a series of austerity measures proposed by the Government to meet its deficit reduction targets.

The court’s decision has left Portugal searching for alternative ways to generate €1.3 billion in savings, and thrown Portugal’s plan to return to the markets by the end of the year into question, with Opposition leaders calling for the government to resign.

While the court’s decision was not unexpected – it made a similar ruling last year – the scale of the measures rejected took market watchers by surprise, with the court rejecting proposed cuts to public sector pay and pensions as unconstitutional.

Portugal has already implemented a range of austerity measures as part of its €78 billion bailout programme, including steep tax rises and extra charges on healthcare.


Its economy is struggling under the weight of unemployment, with the unemployment rate expected to peak at almost 19 per cent by the end of this year. Mr Coelho ruled out any further tax rises, indicating that the savings are likely to come from the areas of health and education.

The meeting, which will take place in Dublin Castle, will be used to showcase Ireland’s technology industry and highlight Ireland as a destination for foreign direct investment.